Currently looking at a long form with a lot of "yes/no" options presented as radio buttons. Is there any evidence to suggest that displaying radio buttons aligned vertically or horizontally is preferable?

I'm not a fan of horizontal layouts for radio buttons for four big reasons:

I am not aware of the available studies but here are a few thoughts.

Horizontal display seem to be easier to visually scan for all answers since you have "Yes" on one side and "No" on the other. It also I think makes it easier for the user to check all the answers the same way; you just move your cursor down (check, check, check). So I am leaning towards horizontal arrangement. 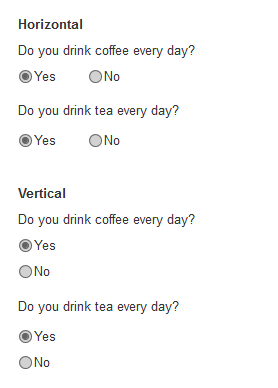 I agree with Anna Rouben's answer. However, my layout is slightly different...

The goal here is to maximize readability and scannability. And this is the layout I've used for hundreds of questions in the past.

It should be vertically aligned. Quote from Windows User Experience Interaction Guidelines:

Prefer to align radio buttons vertically instead of horizontally. Horizontal alignment is harder to read and localize.

Thanks for all the answers. I think my view is now:

I'm not sure how mobile usage would affect this problem but I'm inclined towards vertical as width is typically at more of a premium.

If this will ever be used on a mobile device, a horizontal alignment works better for 2 reasons.

Two, your form will take up much more vertical space if you put the radio buttons on separate lines. That may make it seems like it takes forever for a user to scroll through on a mobile phone.

In a future "Yes/No" will be replaced with "Like", said fb founder (just a joke)

In this case your question: "Do you like drink coffee every day?" Like/Unlike

Like @AnnaRouben, I agree that the choices are probably clearer and easier to scan when laid out horizontally. However, I would like to add that you should always allow users to select 'No Answer', otherwise some of your data will be meaningless.

People need the ability to change an incorrect answer back to No Answer if they mistakenly click or do not understand the question, or if neither choice applies to them.

The horizontal is easier to scan since there's a strong visual differentiation between the Yes and the No. It also forces the choice to be more accurate, because the radios are farther apart. But the vertical is easier to fill, since you don't have to zigzag with your mouse, you just move it down in a straight line.

For speed, stack them vertically. For accuracy, lay them out horizontally.

Microsoft lot of funny guys ... Vertical presentation is preferable as they write and they put horizontal presentation for the question at the end of the article to know if the topic answer the question... Have a look http://msdn.microsoft.com/en-us/library/windows/desktop/aa511488.aspx

So for me, specially for yes and no radio button horizontal is better. And as it is written try to align them for a list of yes or no to be able to check quickly

If you have multiple yes/no type of question, I would go with the horizontal layout.

Does it have to be a traditional radio button if it is only a yes/no?

My answer is no. 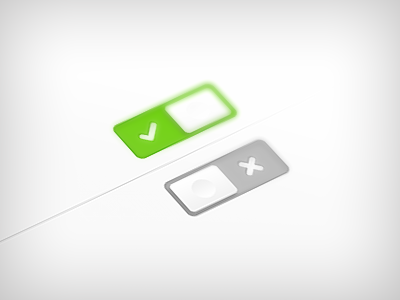 If it is strictly yes/no you should be using a checkbox. The control exists for a reason, it has both true and false in a single item. Now there is no vertical/horizontal dispute.

I go with vertical.

It seems more readable on horizontal against vertical, maybe; but the difference comes when you resize a lot the screen or you open it on a mobile phone.

Not the answer you're looking for? Browse other questions tagged radio-buttons alignment or ask your own question.

26
Is it better to use a Yes/No question or offer the actual values?