What control would best allow the adjustment of signal/noise ratio?

I am developing a web app where a prominent feature is the ability to adjust the signal/noise ratio of the app's content on the fly. The value needs to be represented along a spectrum which includes minimum, maximum, and default values. The user will have already defined what type of content is considered signal or noise by giving it a 'score'.

After using the app myself for some months, a range slider seems to be most intuitive way to display and adjust this value. As a bonus the same control works equally well with both mouse and touch input.

What are the best min, max, and default values to use?

Technically, the scale for S/N goes from 0 up to infinity, and 1 is the default (source: Wikipedia). But it's not very intuitive for the average person to see or use a scale like this:

I'd rather have it be intuitive than technically correct.

Here are some examples I've been toying with: 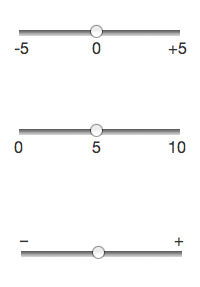 website-design forms input-fields
Share
Improve this question
edited May 5, 2012 at 17:07

When rating items, 'stars' are the most common and accepted method. Simply displaying a list of 5 faded stars is enough to get many people to realize that they can click the stars to rank the item they're looking at. How you store the stars internally is up to you.

However, when filtering do not filter from 0 stars to 5 stars. Instead, filter from 100% of the content shown to 1% shown.

Say one person rates most of their content in the 2 star to 4 star range, and you do Netflix style estimating of new content with 'fractional' stars (so a movie might be scored at 3.2 stars, even though manual rating can only do integral scores). At full noise, all movies should be displayed. When the slider is dialed down to 80% noise, then 1 in 5 movies should be hidden based on that user's personal scale. This may mean the cutoff was moved, not to 1, but to 2.1 (because the user almost never scores things at a 1).

So calculate the distribution of scores for a particular user, personalized, and have the S/N slider (which is a fine control to use) be a linear scale of the % of items that will be hidden, based on their individual rating distribution.

Downside: without estimated or fractional ratings, then the slider will not be a smooth distribution, but 'chunks' of content will vanish at the integral cutoffs, which can be jarring for the user as they drag the slider... nothing... drag it further... nothing... drag it a bit more... and ALL the '3' star items (their most common) fall off. This method requires allowing fractional star ratings, or needs fractional estimates based off of the user's integral choices (Zagat is a good example... users rate 0 to 3, but published ratings from 0 to 30).

Why not just label them signal and noise? Or use the words that describes it. For me as a user any number will be arbitrary. What's the connection between 5,+,10000 with more noise?

So if calling it signal when scoring I would have a slider with "more signal" and "less signal". Although depending on you user finding another word to user rather than signal and noise could be preferable. Maybe just "More scored content" and "Less scored content".

Not the answer you're looking for? Browse other questions tagged website-design forms input-fields or ask your own question.