Can I eliminate volume from my custom html5 video controls?

I'm currently designing a custom full-screen video player for a client, who has provided an Adobe Illustrator high-fidelity interface mock-up. The concept is as minimalist as possible. Their mock-up (notably) lacks a volume control, showing only a play, separate pause, and seek/progress bar: 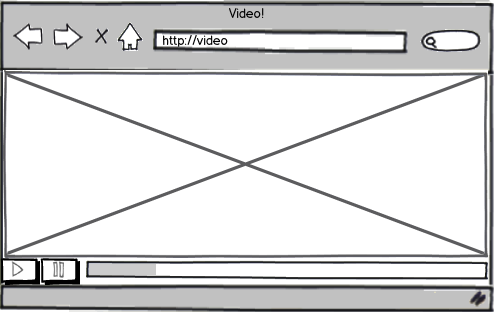 While they seem to have left the volume control out by accident, owing to the extremely minimalist design, I wonder if it's not actually a great idea:

In any event, I alter the system volume; the only time I ever alter an audio source's volume directly is when I'm programming, have music playing in the background and want it quieter than system alerts.

I am not the average user, but I don't expect my reactions to be so removed from normal as to break the interface.

The provided video content has sound, but is promotional in nature and never more than a few minutes. Since the video player is by design always full-viewport, I don't imagine many users will put the video on and return to another task, which is where altering the system volume would become problematic.

So, can I more or less safely do away with the inline volume control in this scenario?

As a compromise, could I add a mute button?

UPDATE: The client came back to us with a request to add 'the volume slider that they forgot'. Still, it was an interesting thought experiment.

Worst case scenario though is someone visiting the site, having the video blast them to kingdom come, and the user leaving the site never to return. That's probably rather unlikely if 70% of visits will be coming from iPads.

If you want to keep things minimal than a big volume slider would kind of junk up the bottom bar but you could make the volume button toggle through 4 settings (corresponding to the sound wave arcs) ranging from mute to 33%, 66%, and 100%.

I do not believe that this is a good idea. At the very least, please test it with real users before you deploy. I believe you will find that there are more people than you think who use the volume control directly on the player. Some use cases are:

Notably, I would look at the extremely popular video providers: YouTube, Vimeo, Netflix, Hulu, and TED. Every single one provides a player volume control. Even if you think all of their user research was wrong, users will expect consistency and be surprised and upset if your player does not match their expectations of having a volume control.

Volume is a needed feature, and implemented properly should not create much noise. It is a very standard feature both in placement, interaction and presentation and as such shouldn't necessitate calling undue attention to itself. It will be more distracting to leave it off in many cases.

On my iPad (which a purported 70% of their target audience will be using), I would never use an inline player's volume control: I would just change the device's main volume with side buttons.

I often use my iPad with a stand or smart cover, in these instances I will sooner use an on-screen volume control than the side buttons as they are much more comfortable to access.

Not the answer you're looking for? Browse other questions tagged website-design controls video fullscreen or ask your own question.

3
Choosing between state and action on video chrome controls
10
What should the default volume of an in-line video player be?
13
How to represent that a video has no audio?
0
mobile html5 input type="x" vs custom mobile controls
10
Why does every website seem to use max volume level for sound?
27
Why don't commercial products use Logarithmic Volume Controls?
2
Video controls on full screen landing page video
28
Is it acceptable to place video controls at the top of a video?
1
Can a Video/Audio Chat application get rid of its own volume control and depend on master volume control?