Please advise on simple, intuitive language for explaining a circular reference. I have a situation where adding children to a parent entity from the UI works just fine. I prevent circular references then tell the user the operation can't be completed in that situation. How to tell them why it's an error?

My current message is:

The operation could not be completed because it would cause the item to be added to itself either directly or indirectly.

GMail just offered up a nice example of the issue. ;)

Could you maybe use some more clear text, tailored to the user's task? "The operation" -- does the user know what the operation is? Is this adding an item to a cart, organizing items into categories, etc? It could be clearer by describing the operation in the error message.

Also, perhaps you could change the veribage to be more particular to what your child/parent objects are. Users may not understand a parent/child relationship if it's not obvious to the context of the task they are performing.

This action results in a circular reference.

A circular reference is where the action uses information that depends on the action itself.

Microsoft Excel kind of does this but in a typically verbose manner:

Although it may make sense to explicitly state what operation was invalid, it may be that the circle that forms the circular reference can have variable diameters, so to speak. In such cases it may be difficult, if not impossible, to either determine or explain what went wrong in terms that the user can sensibly understand and remember for future occasions.

In any case, the onus should not be on the user to have to analyse an action to determine the likelihood of producing a circular reference. Much better to state the problem simply, and thus make the user aware that such a thing can happen and in the process, assure them in a friendly manner that the product can detect the situation for them and prevent it from happening and that the user doesn't have to worry about it.

For more information, see this answer.

Use a picture of Xzibit in the dialog. "Yo dawg...I heard you like operations, but you can't put operations in your operations because it would make you operate while you operate."

Okay maybe that won't work in a serious application. But using a metaphor would help.

"You cannot perform this operation because it would cause an object to contain itself."

Circular references are hard topic either to explain and to understand, so along with a message (sorry, this will make a cycle) consider adding some explanatory image. It could be small, very schematic, but it should really help your users to understand what the hell are you talking about: 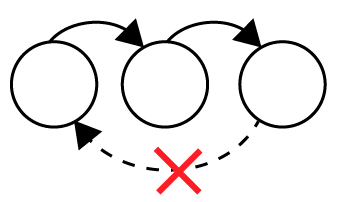 Silly songs and scifi stories not withstanding, "You can't be your own grandpa".

Add a picture of an Ouroboros (a snake eating it's tail) to the error message.

Putting that item there is like a snake eating its tail!

Parents can't be children of their own children!

Trees have a Breadth-First traversal order; cycles don't. That means in laymans terms that you can order them such that the tree root comes first, and each node comes before its (grand)children. With a cycle, that no longer holds.

That leads us to a reasonable dialog: "A is already before B. You cannot add A after B. Do you want to move A after B? [Yes][No]"

(If true, reparent A under B. That's a standard operation and often makes sense in real-world situations. E.g. moving a whole division of a company keeping its management structure)

From the context of Your question, I assume you are trying to provide a warning/error message to the end user who is trying to build a tree like structure by adding parent of a node as it's child.

First of all, this is purely ui issue (weather or not the data structure can handle circular references is beside the point) and should be mostly avoidable by not allowing this type of situation to occur in the first place.

If you allow to pick an existing node from the tree to add as a child node, just filter out (or disable) all the parents in the hierarchy so that the parent of your current node can not be chosen for a child node.

If you are offering drag-and-drop functionality, just exclude the children of the element under cursor from the set of drop targets.

If you use "move to" type of action and pick a new parent for the item, exclude the entire subtree from the set of target nodes.

Only if there is some objective reason why you can not avoid such erroneous situations and have to provide some sort of message, try to explain it concisely and using the domain terms instead of technical language.

For example, in one of my previous project we had a hierarchical structure of Venues that had the same constraints. In there I would have formed a message that would have looked like this:

Tell the user this:

Imagine that you lost your Internet connection.

You call customer support and they tell you that you need to update some driver.

And that the driver must be downloaded from their web site...

I would keep the basic text with the technical term. Users might as well learn it:

The operation could not be completed because it would cause a circular reference.

Now there would be some way to jump to a what's this? explanation:

A circular reference means that the group of items you're trying to add under an item happens to contain that item! Circular references in the item structure require more complicated handling which is currently not implemented in Frobly Software.

Ideally, there should be some advice offered to the user about what to do based on some educated guess about what they're trying to achieve.