How to accept multiple types of input to a table cell?

I have a problem with a column in a table in which the cells may receive data in multiple ways:

I have tried to illustrate some possible choices with some crappy drawings below:

Are there any standards for this, or any well known applications which do something similar anywhere? 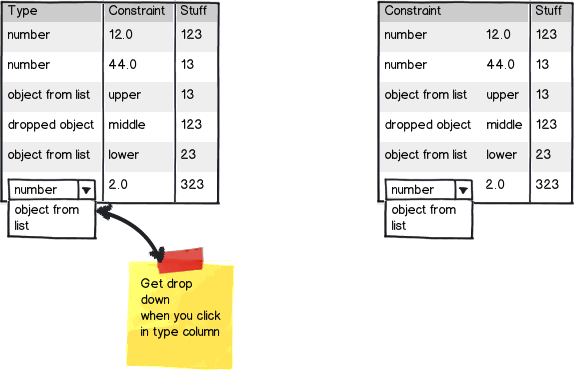 Basically I want something that works as below, but which will fit nicely into a table. What the mockup shows is that there are 3 mutually exclusive ways to specify a distance. Distance can be between two completely flat surfaces, in which case it is enough to specify a Z value. Then the distance is the same regardless of X, Y coordinate. Or you can specify a surface of any shape, in which case the distance between the surfaces will vary depending on X, Y.

If you insist on using a table control, I suggest you use two different columns and disable one cell when the other cell is set.

You will need the option to clear the cell to enable the other cell (by clicking on "X" icon or by manually deleting content).

Alternatively you could have an additional pseudo column for selecting the type, according to which the other two cells in the row are either enabled or disabled.

Not the answer you're looking for? Browse other questions tagged tables dropdown drag-n-drop or ask your own question.

14
Should I combine these 2 mutually exclusive actions?

3
HTML table cell wrapping issue
6
What is the best way to hint that a table cell is editable?
7
What do UX guidelines say about dropdown boxes in table cells?
6
How to add a details link on a table when each cell is already a link?
2
Drop down menu best practice question
2
Best UX options for table cell with multiple items
2
How to enable editing a single cell on a table
2
How to highlight table cells whose value has changed from initial value
1
Which of these is the right way to let people reorder columns in a table
0
Best practices for handling a lot of information in a single cell in a data table