How to inform user that he can use mouse wheel to interact with an object?

On a website I have a map-like gizmo and list-like object. Both has their controls - the map has a google-map-like zoom giozmo and the list has simplified scroll bar. But both can be navigated using the mouse wheel once the mouse hovers over the object. 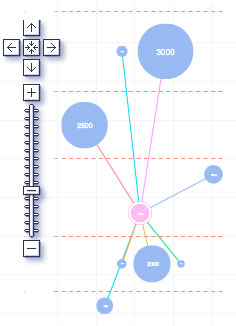 The problem is that for most users it is not obvious that they can use the mouse wheel to interact with the objects. It is probably the result of a broken convention where mouse wheel scrolling doesn't work as it should across all browsers and technologies (Flash?).

How can I make it obvious to the users that they can use mouse wheel to interact with the objects?

My hypothesis is that zooming via scroll-wheel is instinctive so doesn't need to be overtly advertised. See these posts by Jeff Atwood on Coding Horror:

Firstly zoomable interface where he claims that:

Zooming is a natural metaphor that people adapt to as easily as they do to scrolling.

And also his article able the scroll wheel invention that goes into more detail about the history of the scroll wheel - stating that it was actually concieved as a zoom feature for Excel users:

My (Eric Michelman) original idea was the zoom lever. This was simply a lever, presumably for your non-mouse hand (i.e. on the left side of your keyboard if you're right-handed). When you push it away from you the spreadsheet zooms out. When you pull it towards you, it zooms back in.

These are anecdotal articles though, not based on any actual research so make of them what you will.

People learn best when the instructions are given at the appropriate time. So your application should "flash" (or "toast") the message for 3-5 seconds at the time of interaction, which, in this situation, will be when a user clicks on the zooming bar.

This notification should pop-up either where other messages are shown (if there's such a place) or right next to the control. You can always do some testing to see, which placement is more effective. (If you don't have the budget, get a script that would record how people interact with the live app.)

I'm thinking that you could have a hint fade in and out when the user zooms using the visual control, hinting that the user can zoom in and out using their mouse wheel instead. 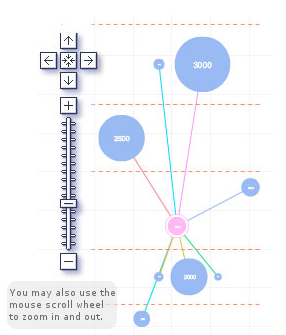 Maybe you want to add a checkbox like "Don't show this tip again" if you come across a user who prefers using the visual control, no matter how unlikely that sounds. So that the user isn't disturbed every time they use the control.

How about a brief delayed tool tip which appears when the mouse pointer moves within the vicinity of the + and - buttons ?

You could use a cursor shaped like a mouse wheel when the pointer is above the zoom bar.

Not the answer you're looking for? Browse other questions tagged interaction-design mouse or ask your own question.

5
Is it OK for scrolling interactions to not scroll content?
11
How can I make the purpose of a complex user interface element more obvious?
5
Why have two mouse buttons when one is sufficient?
10
Mouse wheel interaction with nested scrollbars
2
Turning knobs with mouse wheel
8
How to make perfectly clear that a user can interact with an avatar image?
20
How to make horizontal scroll obvious?
1
How (and when) do you describe "affordance" in your Interaction Design?