Aiming for a New Target: The Perfectly Featured Product presents an argument against featuritis (and provides some explanations as to how those situations arise). 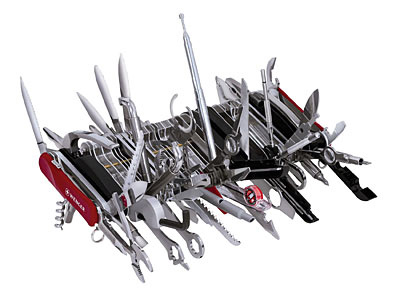 The author (John Devanney) suggests that UX Designers keep heed of the KISS principle. Which, though aspirational, is not particularly informative or helpful.

How can the design team determine the ideal feature mix?

Is there an established methodology for this early phase of product development? What UX techniques could be employed to assist choosing which features to bundle into a product, and what are the pros and cons of these techniques?

Perhaps the best advice I've heard in this area is "the design team is wrong" - they can't do it in isolation.

Instead, determine the Minimum Viable Product - the version with the smallest possible feature set that's of actual use, release that and act on customer feedback as you iterate.

[This isn't to say that you only use customer feedback, but that you can't get any until you release and that it's more valuable than you might think.]

Look for judgemental analysis such as "feature creep" does not dissolve or sink the product in totality.

A note upfront: I assume 'early phase of product development' in the question refers to the development of new features into an existing product. The referenced blog post is also primarily about products in later stage of their product lifecycle. The stage where you've got a product that hopefully got traction and has active users. Some of the users demand new features. Probably the most active users, the ones you really like. Their needs might be special but since you value them you add the features. At the same time the product gets more complex and harder to learn for new users. Ask yourself: Can the number of power users promoting your product compensate for the number of users that sign up and never get active due to the complexity?

A common way is to 'ask' users during user research. While I think it's important to listen to customers it can also kill a product at the same time, if you kind of misunderstand. It's crucial to find the right balance between maintaining the current (core) product and adding new features to it. This balance needs to be analyzed and tailored for each product. I can't think of a general rule of thumb but I have some thoughts:

UX techniques: Besides the standard techniques for testing a feature wireframe or prototype and collecting feedback from users I'm not really sure if there is a particular UX technique for prioritizing features. Assuming there is a bunch of potential features one could evaluate various aspects in a matrix, like - fit with core product - fit with general product vision/strategy - demand/amount of user feedback - revenue potential

A note on Minimum Viable Product: I think the MVP concept is great for startups looking to create a new product from scratch, and for companies that already took the decision to add a particular feature now defining the scope of it.

The first rule is keep it simple.

If you only need one feature to make a successful product, why overdo it?

David McClure from 500 Startups said it this way:

"Features are like having sex. You make one mistake and you have to support it for life."

As far as the mix of features, I think you just have to keep your product/service centered around the user's needs.

Not the answer you're looking for? Browse other questions tagged design-process methodology product-management or ask your own question.

2
Is there any testing methodology similar to A/B testing, but without a specific goal?
3
Methodology difference between UX and Usability
0
What is your design Methodology?
5
UXD Methodology - Best practices for identifying a Global Navigation Toolbar implementation
3
What sort of tasks should be included in a lab test to determine baseline for a user?
5
User Testing Exercise for Feature Prioritization
4
What is the Design Sprints methodology?
1
Is it appropriate to discussed the proposed usability method in literature review or in methodology chapter?
3
Determine scenario for task or let user decide?
1
feature prioritization