Which is worse--making the user close a file before they can export a second time or having multiple similar files open?

I have an grid application that allows users to export the grid to Excel and display it. The application gives the Excel file a name that is related to the grid. If the user makes some changes and does a second export while the file from the first export is still open, it causes a System.IO.IOException, which says, "The process cannot access the file 'xyz.xls' because it is being used by another process."

Right now the user gets a message to close the original file and to try exporting again. There is no simple way to close the file from my application that I know of. I am thinking about changing the application so that the file has a unique name (using a guid or something) every time it is exported so that the exception does not occur. However, that would mean the user would possibly have multiple files open.

Which is worse--making the user close a file before they can export a second time or having multiple similar files open?

Exporting to Excel is an option. Some users never export. Some users may export 10 or more times in one session. Users typically export to manipulate data in Excel or to format the data how they want it and then print.

If you explained a bit more about the use case for your app, we might be able to give a more constructive answer... for instance, how does exporting fit into the user workflow? Is it a universal step in the process, or is it an option? How often is the user likely to export multiple times in the same session? etc.

However, given what you have described, I've got to ask why you're not allowing the user to specify a file name for the exported file (and why you're making the assumption that a user who exports the file to Excel even wants the file to open in Excel immediately). More typically, 'Export' functionality is just another type of file save option. So, for instance, OmniGraffle's export menu looks like this: 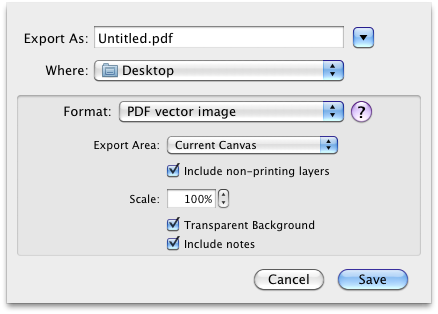 ... which provides many more options for the power user without slowing down common use cases (because the defaults make sense, including a filename that matches the native file name... if you try to export again using the same name, you get a "want to replace the existing file?" dialog window).

Edit: Given your further scenario description, I would strongly recommend that a dialog box is the way to go. If directly opening the file in Excel after export is important to some users, I would include a checkbox on the dialog saying something like "Open in Excel after export" or something like that. Remembering the user's last-used settings will help in not making this too much of a roadblock. Of course, as always, your milage may vary -- so test, test, test.

5
Designing and Implementing Undo / Item-Level Undo
4
Best way to organize interface
4
Complex Automated Wizard using filenames User Interaction Problem
0
Expected behaviour after file upload
3
On a tablet, is it okay for both modal-style windows and full-screen programs to close with different methods?
4
how to declutter interface and save functionality?
1
Data table entry: creation vs editing - how to design workflows for least friction and effort
6
what transition to have between two screens when there is where minor change in content?
2
Should non-existant files in a recently used files list be deleted without user prompt?
1
How to consolidate multiple versions of a download page into one?