OK for dropdown button to be on the left?

Perhaps a minor point, but I thought I'd ask anyway...Normally, the button to drop a dropdown display is to the right of the display area, but I have the option to put it on either side, like so:

EDIT: I should mention that this dropdown is really a "combo box" that can both drop down a list and also accept user input into the field. For that reason, I cannot have the functionality that the user can click anywhere on the dropdown to drop it, since clicking in the field just sets the cursor there.

There are a few reasonable explanations for putting the drop-down arrow on the right (at least in LTR languages):

That probably also leads to the last possible explanation; chance, which is simply that it had to be on either the left or right and once it was chosen to be on the right, why unnecessarily change things in subsequent implementations?

Don't forget, many users don't target with the mouse, and when in doubt, the most predictable solution is to leverage the familiarity that using standard controls breeds.

Microsoft's UX guidelines for combo boxes don't explicitly mention a side for the button at all.

I can say I've used applications that move the scroll bar to the left side of the content pane and that's taken me an inordinate amount of time to adapt to. For that reason, I'd personally err on the side of the standard control in this situation.

It sounds like your main reason to violate the standard is to collect similar controls together. Intuitively, I think I'd find your proposed alteration uncomfortable as a user, but I think it sounds to me like you'll need to make that call based on the surrounding interface (which naturally only you can see). I'd be particularly interested in how you'll reconcile the readability issue with the control's label!

If you retain the defacto standard layout with the icon on the right and also behaviour of dropping-down regardless of where you click, then you solve your cursor-movement problem as well as retaining an intuitive UI.

I believe the common convention is because people read from left to right and and people expect to see some kind of tip or text which informs about what the action is going going to be executed before they see the button which enables them to perform the action. Further more deviating from custom confuses people as they are so inclined towards right dropdown icons that this would confuse them

Just to mention an example: the Firefox search widget (yet little more complex than simple dropdown) use a left drop button to modify search engine. 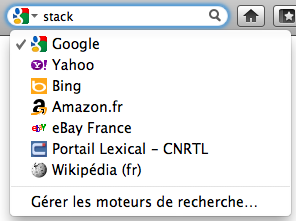 Certainly not the better example of consistency (the magnifying glass is a button that does not look like a button) but illustrates that it could be acceptable in some cases.

You should only deviate from convention in something like this with a really good reason. In the case of the dropdown arrow here, I view it as the user reading the copy then seeing the action. It's not a particular saving to move the mouse that tiny bit extra :)

I suppose it is best not to deviate from what the user is used to. Maintaining user-centric design seems paramount to me. Since most users 'mouse' with the right hand, it seems intuitive to just have the dropdown on the right-hand side, in such a case, where the user does not have to 'mouse across' the widget to be able to get at the widget's control.

[Is it] OK for dropdown button to be on the left?

I'm writing this purely out of personal experience with no solidified research to back up my answer.

In my memory I have never used a select box that had a dropdown button on the left side. It's always been:

Because of this, adherence to consistency dictates that all select boxes continue to have their buttons on the right side of the text region.

Wanting to use a different style of select box is a strong indicator that a select box is not the appropriate control for the situation.

By having the drop down arrow on the left, it's easier to distinguish users that intended to open the drop down, vs enter free text. (think touch screen input)

Not the answer you're looking for? Browse other questions tagged dropdown alignment or ask your own question.

8
How to handle inter-related dropdown choices?
24
What are the best practices of button alignment?
3
jQuery AutoSuggest or Dropdown for Data Input
7
Left-align or right-align a Call to Action button?
4
Standard behaviour of dropdown buttons and its styling
0
Dropdown Error State for Quiz
0
Best practice for form fields with interdependent dropdown menus
2
Where to place output button below file field
1
Placement of delete filters button - inside or next to dropdown?