How to indicate software is a trial?

I have this software which also has a Trial version (30 Days full features active). What is the best position to add the word "Trial" to signal this version:

I tend to want it on the footer because it gives a little more information, people expect it to be there as that's where the version info is, and it's not so intrusive. But I don't really know what are the best practices or even legal issues concerning it.

You could also add in the message to the title bar, such as Sublime do for their editor (in this case showing it's UNREGISTERED):

This doesn't impact any of the actual usage of the application; it's not too distracting but just sits there as a gentle reminder in-case you want to do something about it.

Something I've also seen (but can't remember where) is to show no indication that it's a trial application at all but just receive an email on initial download thanking you for trying out the application, another mail several weeks into it that gave some useful hints and tips to get you to try out (which also handily 'reminds' you that it's a trial but also reminds you that you actually downloaded it in-case it's been forgotten since initial download) and then a final email reminder just as the trial is due to expire.

Nothing seemed like it was hassling to purchase but just lets you get on with testing out the application.

Here's how we do it in Handcraft: 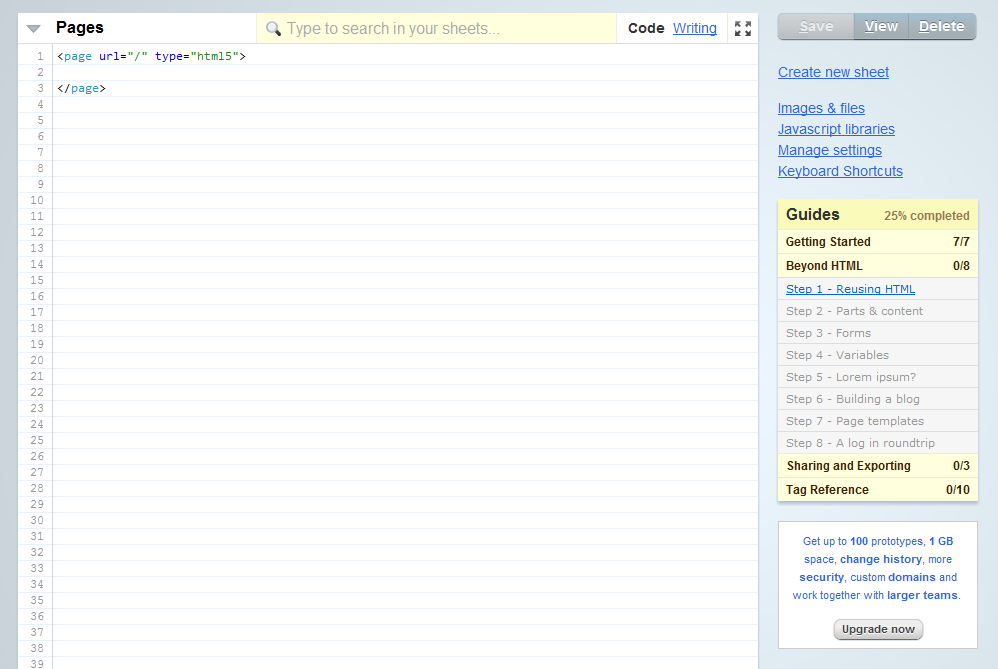 See the bottom right. I showed the entire screen so that you understand how it is positioned relatively to everything else.

I used a white box to stand out from the blue/gray background. I used blue text because it blends in with the other blue links on the page. I used a small, unobtrusive button that nevertheless clearly looks like a button as the call to action. Although it's important for us to put this here, we didn't want to distract or annoy anyone by doing so. So it's a mellowed out message rather than being in your face.

Note also that rather than telling you you're using a trial and that's it, we instead take the opportunity to tell you what you're missing. This message is only displayed for trials (free accounts), so there's really no reason to say "Trial" - instead, it's marketing that helps us convince you why should be upgrading. I think a call to action is always going to be more useful for both us and the user than just the buzzing annoyance of knowing you're using a trial.

In sofware I usually see the following solution for showing 'Trial' period:

Days left of trial version should be shown in the header if you want your users to see it (if it is not so important you can go with the footer option or use both: main info in header, detailed in footer)

I think there's been a misunderstanding as this is a Windows application not a web one.

Either way the solutions are good but we found a better solution in calling it "1 month de FREE subscription" and losing the Trial altogether as it refers to some lack of features, when we actualy give the full featured product for 1 month.

My concerns were mostly legal as it seemes that when the trial expires you need to have the "blame" of illegality on the user, you (as a company) doing your best to inform him what he's using and what are the implications. Thus having the "Trial word pop up, and that would mean the best placing next to the logo. Still waiting a more advised answer from our lawyer.

You can have a modal window firstly, highlighting the days left for the trial period to end. This could be on a daily basis when the software is loaded on the machine. This helps the user to keep informed priorily.

Its best to have the Trial term indicated on the header section, ofcourse its above the fold and readily makes people noticeable of it. Unless your footer is above the fold, its not going to be helpful, since people will not readily scroll to find such information, as it needs to be somewhere it is noticeable.

If your software has some color coding distinct for trial run, make good use of it, such as it is a visual metaphor.

Not the answer you're looking for? Browse other questions tagged copywriting position trial-period or ask your own question.