Are there any studies that validate the golden ratio principles in designing websites?

Something like this that suggests the golden ratio is indeed appeasing to the eye from a user experience perspective?

The golden ratio can be seen as a compelling argument for providing a beautiful interface, but by definition it is also a design constraint.

The golden ratio is great for sizing some elements of content in subtle ways that make little other difference, but as a content layout strategy, it belongs with print media where there is static content. It has no place with modern multi-channel media consumption that feeds desktop, tablet, mobile or TV and needs to be flexible, fluid and responsive to cater for all the different display modes.

Twitter put up a picture in their flickr stream that shows #newtwitter (not #newnewtwitter) being designed around the principle of the golden ratio: 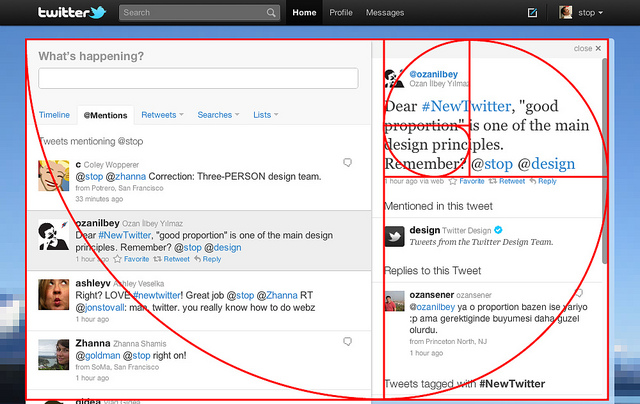 So you may say "What could be better validation of using the golden ratio than Twitter using it?" Well, wait a minute - as they point out, your mileage will vary as soon as you go beyond the narrowest view. So they didn't use it as a constraint, they used it as a starting point only.

And that is the key - by all means use it as a guide - a starting point - but don't make it a constraint.

Golden ratio has been used by mankind for centuries.Its use may have started early as with the Egyptians in the design of the pyramids - or atleast they were the first passing the measurable proof.

It also appears in physical proportions of the human body, movements in the stock market and many other aspects of life, love and the universe.

Its validation can appear in hands/eyes of the user when the Golden ratio is utilized in the design. The validation of order and rhythm is seen in Greek buildings on using the Golden ratio. But I cannot pull out any websites that says due to the use of Golden ratio we had got more users or ROI that has pumped up.

The only way this could be done is to do A/B Testing of two designs with and without Golden proportion and clearly find results when using best of design principles.

The golden ratio isn't specifically about websites, it's a general principle about proportion in design. The best treatment I've seen explaining how it works is in "Design for hackers" () by David Kadavy, where he devotes a chapter to exploring what the golden ratio is, its strengths and limitations, and how it is applied to design in a number of domains.

Not the answer you're looking for? Browse other questions tagged website-design gui-design or ask your own question.

32
Why does the golden ratio work? Or does it?
5
Usage of Golden Ratio

32
Why does the golden ratio work? Or does it?
1
Applying the golden ratio to a form layout
12
Skeuomorphism or OS-consistency?
3
Golden ratio between words and pictures
1
Are there are any studies about displaying user opinions?
24
Why are visitor counters for websites not used any more?
2
Interactive documents v websites. What research/studies exist to cover when one should be used over the other?
10
Loading time and user expectations