What's the best way to select a suburb from a large list on a mobile device?

I need the user to select the suburb that they live in. It's no good just entering any old text, it has to match one of the suburbs in my database.

Obviously the database list of suburbs is quite large, and there is not much space on a mobile device to display autocomplete options.

What is the best way to do this?

I would take a leaf out of the Hipmunk android mobile app for finding flights (and hotels). Pictures below are taken from the video on the Android Market page for this app.

On the initial screen is a box for departure and destination points. 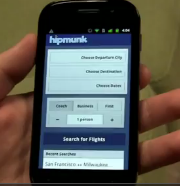 You tap the box and a screen appears where you can start typing the name. A few recent selections may appear below already, in the event that you have 'been here before'. 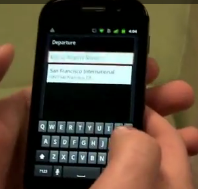 As you type, a list of options appears underneath in a scrollable list of good finger height buttons for you to choose one. 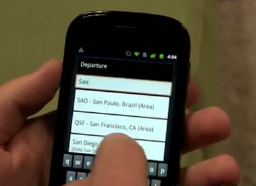 If you tap on an item in the list it is selected immediately - or if you swipe/scroll the list, the virtual keyboard is hidden, giving you more space to view the list of items. 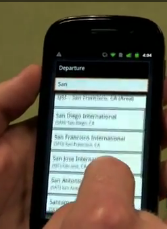 When you select an option you are immediately returned to the form where your selection is entered into the box. 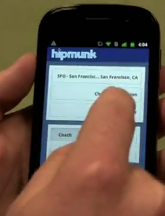 If instead of selecting one from the list, you simply select done from the virtual keyboard, then the first item in the list is taken.

Note that this involves a number of steps in in order to get to the final name, which you might initially think seems more involved than necessary - but actually, provided the experience is seamless and frictionless, and the user doesn't have to think about anything, then users are happy to make one or two extra simple steps in a process.

You don't have to try and reduce the complexity down to a single click experience - you just have to make it easy. This approach also significantly reduces the clutter around the form itself because you are not needing to provide in-place selection.

Although these screenshots are taken from an app rather than a mobile website, a very similar process can still be achieved.

As another consideration - you may have a hierarchy of information such that it may make sense to select an Area first and then a Suburb, at which point you only need to provide a list of the suburbs that are appropriate for the given area. This depends on what other information you are gathering at the same time. The method above is simple enough that it may actually still be significantly easier to select a suburb rather than an area and then a suburb even though there are less options at each point.

Implement something like real-time searching, like Spotlight on the iPhone. Have a search box with a box below that shows all the results that match what the user searches, and have visual feedback when the user taps on one of the results. Kinda like your idea with the autocomplete text box, but showing that it's actually a search box will make it more understandable.

Boroughs in Australia are identified by either their names or postal codes. Names can misspelled but postal codes are just 4 digits. In addition, your app asks for where people live and most adults should know their entire address.

Thus, your simplest solution is to prompt for the postal code, use AJAX to fetch the borough name in the background, and then display it next to/under the field.

You can find the database of postal code-to-name mappings on GeoNames or something similar.

Not the answer you're looking for? Browse other questions tagged mobile-web autocomplete or ask your own question.

3
jQuery AutoSuggest or Dropdown for Data Input
7
Should I change how a list is displayed based on number of options?
21
On Mobile Web, what's the best way to present Date of Birth form fields?
1
Google places autocomplete with multiple(2) submit buttons
4
Autocomplete / Typeahead / Find As You Type widget usability on mobile
4
Typeahead / Autocomplete graceful degradation
2
Autocomplete only specific words within a Freetext Box capturing a paragraph of text
3
Manual entry for missing items in datatable
2
Auto-complete click suggestion
1
Search autocomplete with static and remote data