Why do numpads on keyboards and phones have reversed layouts?

I came across this on the web. It's supposed to be funny, but we all know better :) 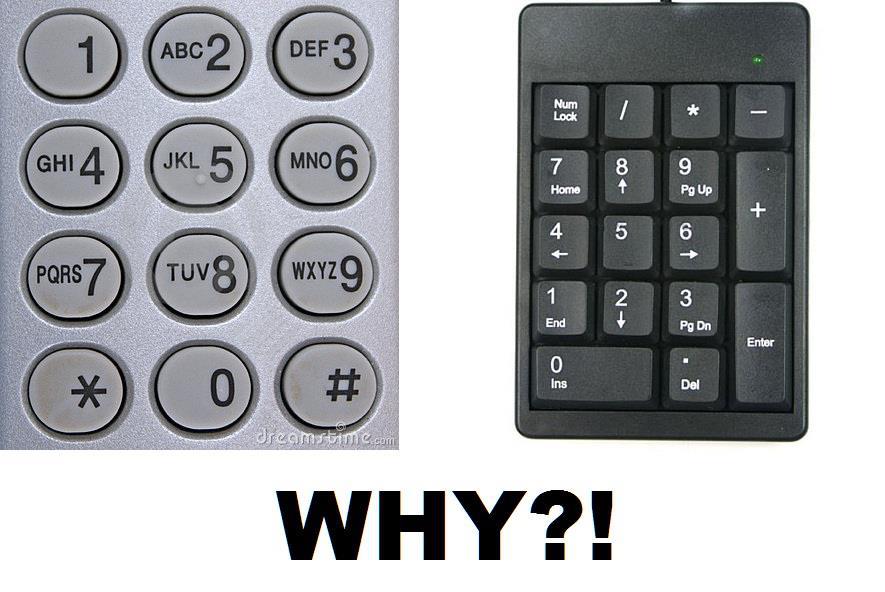 So, why are the numpad layouts different, and what are the reasons behind each?

There's this humongous article called Keyboard Trivia that has collected many of the theories and stories. The summary of facts:

There's also a theory that phone engineers wanted to slow down people who were fast at entering numerical data, which would jam lines and produce dialing errors, so they reversed the layout. However, records of AT&T Labs' research clearly invalidate it.

One additional possible explanation is that with the calculator layout many calculations can be performed along the bottom two rows and the plus button only; zeroes, decimal points and the enter/equals button.

Since the main buttons are all at the bottom, it makes reasonable sense that the other numbers would count up from the bottom too.

I suspect (but have no proof) that the phone keypad layout would make typing on a calculator more difficult for most simple calculations.

I have a reasonable explanation. Since I come from mathematics background, this is the first thing that comes to mind.

You probably have heard of the Benford's law, also known as the "First digit law". It says, that digits 1,2,3 occur more often than 7,8,9 when dealing with random, arbitrarily big numbers, which numbers that users type into calculators, in fact, are.

The graph is something like this and shows heavy bias against the digit "1". Therefore it's sensible to put digits 1, 2, and 3 to the bottom row, as it's closer to the enter and also user reaches them easier. 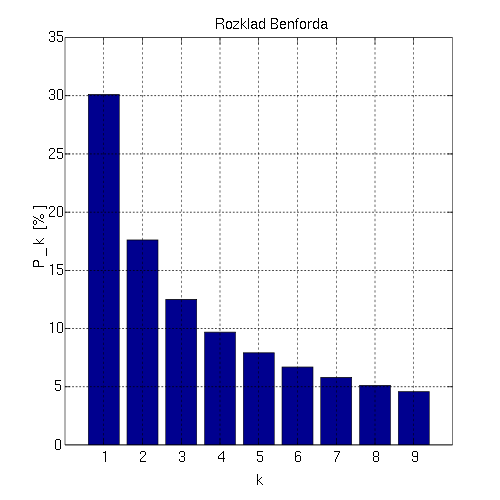 Since phone numbers are have limited number of digits and are in fact, randomly scattered, the Benford's law doesn't apply here, which means all the digits occur with similar frequencies. This might be the reason that the more natural ordering is used, since there's no reason to complicate.

In the early sixties I took a year out of university and got a job in the internal audit department at the head office of a large insurance company in Toronto.

A substantial part of my job involved using an electromechanical calculator to check figures submitted by various departments. The keyboard layout was identical to present computer layouts as well present digital calculators. Index finger was for the left column, next two for adjacent ones. Thumb did zeros exclusively. I became very fast at this touch based skill, as my eyes were on the numbers on paper (there was no visual feedback - just the numbers that were printing on the tape, but you didn't look at that. Mistakes were extremely rare, and required a redo of the entire document. This was also in the days of rotary phones.

Imagine my shock when reversed digital keys appeared on telephones. My skill was not transferable to them. The decision by Bell Labs, or whomever, to reverse the layout was thoughtless at best, stupid at worst.

The phone design of 123 Top, and 789 Bottom was merely based on the research done by the Bell's labs:

"This was due to research conducted by Bell Labs using test subjects unfamiliar with keypads. Comparing various layouts including two-row, two-column, and circular configurations, the study concluded that while there was little difference in speed or accuracy between any of the layouts, the now familiar arrangement with 1 at the top was the most favourably rated."

So with no (or not enough) factual studies to rationale the designs, we can say that:

Push-button or Touch-tone keypad designs are merely based on the Bell's labs research, and I would add it is a logical order when no studies proving the opposite existed at that time. Reading is Top to Bottom, Left to Right for those who designed it (in USA), so it starts 1,2,3 Top...to 7,8,9 Bottom [Total of 9 digits] we have three rows with three digits in each.

Zero is the digit number 10 (does not fit in a 3x3 matrix), it has to be located somewhere. Create another row (of 3 digits) below as you going Top to Bottom. Now if you put it on the left or right corner, you need a reason to do so. Locating it in the middle makes it a unique location (it is a unique digit) and easy to spot [my personal point of view].

Another point: if you take a look at the Rotary-dial phones, notice that they mostly have the Zero as the first digit located bottom middle, so Push-button design kept the zero in the same location as the Rotary-dial design, maybe?

*Some Rotary-dial phones has the zero a little to the right. 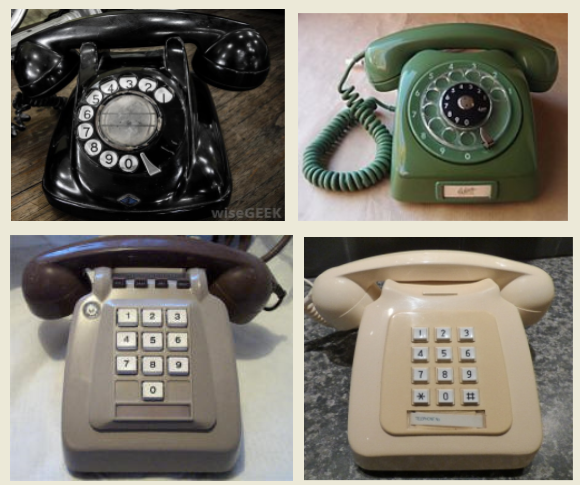 As answered above regarding Benford's law:

Numpad on keyboards were not designed with the goal to make phone calls, they were rather designed for accounting and calculations purposes (helpful in applications were numbers are heavily used). Adopting the Benford's law, it makes more sense to locate the most used numbers close to the human fingers on a keyboard (1,2,3 Bottom...7,8,9 Top).

Notice that Zero is always placed bottom no matter the numbers layout. Users just got used to it there? maybe.

Personally, I saw many bank employees or generally accountants using the numpad on keyboards very fast without the need to look at the keyboard, maybe they are just used to it. What if the design is Top - Bottom will they be as fast? Well, not according to Benford's law.

Different pulse systems are used, varying from country to country. For example, Sweden uses one pulse to signal the number zero, and 10 pulses to signal the number nine. New Zealand uses ten pulses minus the number desired; so dialing 7 produces three pulses. In Norway, the North American system with the number '1' corresponding to one pulse was used, except for the capital, Oslo, which used the same "inverse" system as in New Zealand.

For this reason, the numbers on the dial are shifted in different countries, or even in different areas of one country, to work with their system because of the difference of the number arrangement on the dial. The dial numbering can occur in four different formats, with 0 adjacent either to the 1 or the 9, and the numbers running in ascending or descending order, with either the 0, 1 or 9 being closest to the finger stop.

Also: you tend to hold the device at a different angle. You might use all five fingers on a keyboard numpad, but on your phone only your thumb (or the index finger of the hand not holding the phone)..

schugaschuga
1
1
Add a comment  |
Highly active question. Earn 10 reputation (not counting the association bonus) in order to answer this question. The reputation requirement helps protect this question from spam and non-answer activity.

Not the answer you're looking for? Browse other questions tagged layout keyboard physical or ask your own question.

9
Why are the numbers on a calculator sorted descending and on a phone dail pad sorted ascending?
0
Why are there different configurations on number pads?
28
Keyboard number row ordering
5
Which numeric keypad layout (PC or register) should be used for a touch panel?

4
What are some reasons that not all websites have fluid layouts?
8
What are some advantages of left-aligning columns within the browser window?
24
Why do physical keyboards still have built-in numpads?
11
Why are nested column layouts getting so popular?
4
Merits of smaller less verbose keyboards for phones/mobile devices
9
Why Greek letter mu (μ) on European keyboards?
80
Why do modern keyboards have Scroll Lock?
25
Why do stairs have overhangs?
7
Why is there no standard layout for computer keyboards?
4
Why are keyboard numpads on the right-hand side?