Is “scrolling in reverse” a horrible idea?

I just saw the new Conduit website. It features a "reverse scrolling feature" - when you scroll down, the sidebar scrolls ups, and the other way around.

This seems to me like a horrible UX idea. It's counter intuitive, and goes against everything we know about how scrollbars work.

Am I right? Or are there sometimes good reasons for such reverse scrolling?

I wouldn't approach the Conduit website from a UX perspective. I would look at it from an advertisement angle, i.e. as just a gimmick designed to get attention (albeit clumsily, IMO). Print advertisements have been using such a gimmick for years, example: 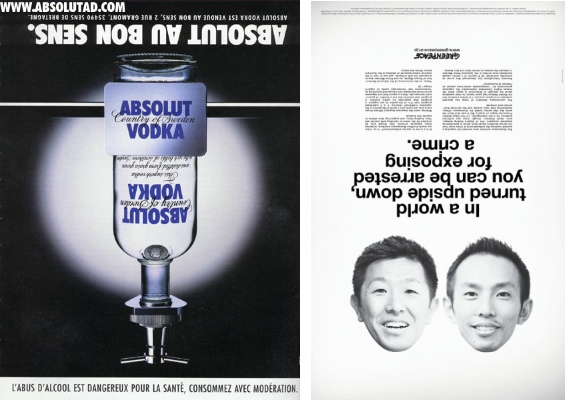 I cannot think of a good reason to use reverse scrolling, no more than there is a reason to print upside down.

actually, reverse scrolling is introduced in Mac's Lion OS. The reason they did that was mainly to transition people to get used to the scrolling of touch devices. this is also to turn the touch-pad on the mac like an "off-screen touch screen"

traditional wheel-scroll scrolls down to go down. on the otherhand, on a tablet or smartphones, you "flick up", "drag up" or "swipe up" the page to get to the bottom. the motion is synonymous with "scroll up" hence the reverse.

I heard this from Attack of the Show in G4TV when they reviewed an iMac with that type of scrolling. it's also explained in the Lion's new features under "Scroll direction preference"

not a bad idea for an OS, especially in the touch-screen era. but i don't know why they applied it in a website. just being different? being unique?

It is horrible. While I accept @Hisham's answer that it is advertising rather than usability that is on display here, I would be very reluctant to buy from them to put on my site, because they seem to have some bad ideas, and I do not want to have them ruin my site. So I think it also fails as advertising.

There is a place for fixing elements so that they follow the scrollbar - sort of reverse scrolling at the speed of the scrollbar. But this is just wrong, and breaks the rule of doing things as people expect, unless there is a very good reason for doing otherwise.

Sometimes you have to distinguish between usability and UX. From a usability perspective, it is a horrible solution. However, from a UX perspective, I'm totally getting it. It's a funny way to show how Conduit fits into the grander scheme of things. The 'wrong' scrollbar lists: '1998 first blogging community', '400 BC first pigeon post', etc. That tells you something about the culture of Conduit. It's pretty neat if you're able to put such a complex message into a simple homepage.

Reverse scrolling should be left for tablets. It should stay the hell away from non-touch displays.

Not the answer you're looking for? Browse other questions tagged scrolling or ask your own question.

2
How to scroll up and down a mobile document
33
Is infinite scrolling justifiable?
17
How can the classic footer elements be integrated into an infinite scrolling layout?
3
Should I use dynamic fast scroll on an Android application?
1
Scrolling inside overlay or on the whole page
3
Best way to indicate a new cycle (of a set of actions)
15
How usable are bars that disappear / reappear on scroll?
2
What makes Reverse scrolling a sign of Bad UI?
6
natural/reverse scrolling usability studies
0
Data entry template tricks user into thinking they are done entering all data