I'm designing an analysis tool which displays a number of result items in a list/table. The items are issues the user should pay attention to and react upon, like "There's a problem with X". The user can choose to ignore the result items thus effectively removing them from the analysis. Later, result items can be "un-ignored".

I'm having trouble figuring out how to best design such a feature, including the bulk part of it (that is, ignoring/un-ignoring all result items at once).

A typical bulk operation design would be something like this using checkboxes: 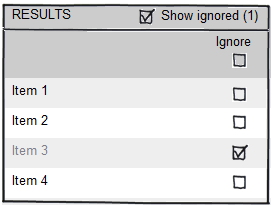 However, a usability guideline claim that one should always use only positive phrasing of checkbox labels (as discussed in this thread). Thus, conceptually, it's confusing that to ignore an item the user has to "put a checkmark to it", and to un-ignore, the checkmark must be removed.

Another approach would be to rephrase it to "Include" and then having all checkboxes checked initially. However, such approach somehow de-emphasizes the ignore feature (and people might be thinking, initially, "yeah of course these result items are included".): 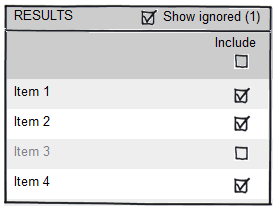 Yet another approach would be to have buttons with different icons depending on whether an item is ignored or not: 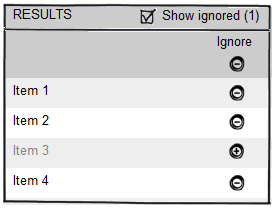 The problem here, however, is that the bulk operation label doesn't apply to the ignored items. Furthermore, the icons are less familiar user interface widgets.

This depends a lot of what you're trying to do.

If Ignoring items is the norm and you don't expect a lot of items to keep simply show a list of checkboxes all checked.

If the user really has to choose between keeping and ignoring items I would go for three little rows of items.

The Items in the main List would consist of a label and two buttons. One button for Keep and one for Ignore. It would be one fluent item where clicking on the left would keep and clicking on the right side would ignore the item.

Using drag and drop the user would be able to move items too, but that would be just an extra luxury.

I have settled for using only one list and applying iOS style toggles for individual items and textual action links for bulk operations. Also, for extra clarity, I have applied strikethrough to ignored items:

Not the answer you're looking for? Browse other questions tagged interaction-design checkboxes or ask your own question.

6
Task-based navigation with menu-items expanding to Mega Menus
5
Show list selection based on multiple attribute selection
4
Should list item specific actions be hidden on default and revealed on hover or always be displyed?
0
How should I include a multiple selection mechanism in a checklist site?
0
How to make sure "double-check" list properly and comfortably checked?
5
UI to best convey whether results of selections in a filtering interface return intersections or unions (and/or)
3
Are toggle buttons a good alternative for checkboxes?
3
Table which contains checkboxes and radio buttons - labels issue
1
Does designing an automatic interaction based on user intent a good thing?
0
On an accordion or tab interface with animations, if a user rapidly clicks multiple items, which should open - first click or last click?