What's a good UI for a "zoom" function?

I'm making a component for a webpage that will need zooming in and out at the location of the mouse cursor. The de-facto standard way I know of doing this is via Ctrl+Mousewheel... but I can't use that. The reason is that Firefox doesn't have any mousewheel support at all (though there are hacks with scrolling), and most other browsers intercept this particular gesture to perform their own zoom of the whole webpage - which I can't override. Also, simple scrolling with the mousewheel needs to be there too, because the data (especially when zoomed in) will be larger than the viewport.

As such, what other widely accepted mechanism is there to perform zooming at the mouse location without compromising standard mousewheel functionality?

A mechanism used in some cases is simply to click with the mouse at the point about which you want to zoom in/out and then drag the mouse up to zoom in and down to zoom out.

Typically a 2D view can be click-dragged via the left mouse button, so usually the click-drag to zoom would be off the right mouse button. In some applications a modifier like ALT is used - I guess it depends on the relative priority and ease of access required for a given scenario.

The good thing is it's achieved via a single action and it's essentially an invisible slider that has no limit on length. Even if your cursor hits the top of the screen you can keep going.

It's best combined with real time scaling of the view so that you can see how much you're zooming in/out by, and so that the user experiences a smooth and synchronized sense of direct manipulation. It's one step closer to direct manipulation than using a slider which often feels one step removed from the end result.

I'd also suggest some visual feedback to the user if they hit zoom limits - similar to the way Android apps glow or bounce when you scroll/swipe too far.

The not-so-good thing is it's not obviously intuitive or easily discoverable without actually trying it and so would require teaching the user.

Can you use the same magic-y keyboard shortcut goodness that Google uses in several of their apps? https://www.google.com/reader/ui/660982038-en-keyboard-help-tearoff?hl=en

Just to see what happens, I hit the + key in Reader and it will set the zoom level for whatever feed you have currently selected. The label adjusts to the feed's current zoom size:

In Google Maps, scrolling the wheel up or down over a particular portion of the map will zoom in with that area centered, so there has to be a way to determine the user's mouse location in a web app as well: 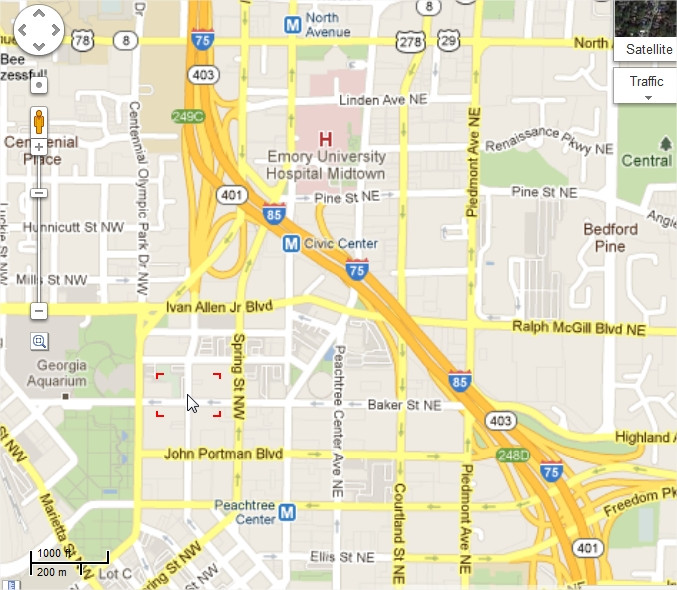 If it's possible, you can combine these two methods and allow the user to hit + or - and zoom at their current mouse location.

CTRL+Mousewheel is the default control to change magnification of content in general and it's used primarily for enlarging content in case of visual disabilities. Don't ever change its function.

Firefox supports pure mousewheel zooming via JavaScript. Google Maps has multiple options for zooming: double-clicking, mousewheel (intercepted from default scrolling action), and even multi-touch zooming gesture. Dig through their scripts to see how exactly they do it.

OK, so I think that I've decided to use a dedicated popup slider whenever you push SHIFT. And you won't have to drag it manually either - just hold SHIFT and move your mouse. Perhaps not the most obvious thing in the world, but not difficult to master either.

To be fair however, I won't accept my own answer, but whichever other answer is best.

Not the answer you're looking for? Browse other questions tagged scrolling zooming or ask your own question.