Are there any advantages to matte interfaces over glossy interfaces (or vice versa)?

I'm curious about the usability of such interfaces for complex tasks, repetitive tasks. Are there any studies that focus on this comparison?

Note: My question is not just about phone interfaces but also desktop/web interfaces. 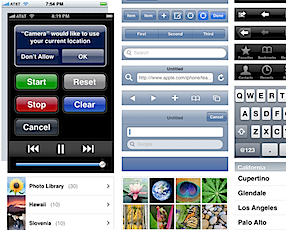 I think it's a matter of visual flair as long as it's handled properly.

The only usability issue I can think of would be if your gloss or lighting indicated an unnatural light source (eg bottom lit) or if the lighting failed to indicate affordance (eg the "pressed" state does not appear to be physically depressed). Both glossy and matte buttons/ect can indicate the standard variety of affordance states.

As far as actual UX it would only depend on how well it matches with your interface. Mixing glossy buttons with matte buttons or flat colors can make a striking contrast, usually not in a good way.

Check out this example from Fark.com (only logged in users see the glossy buttons):

The supergloss "smart" and "funny" buttons really don't match with the flat colors of the rest of the interface.

Also make sure the gloss/matte/ect style matches your Design Persona. Is your design fancy, slick, so shiny you want to lick it? Does your audience appreciate that? Gloss is probably okay if so.

If your design is practical, simple, efficient, gloss is probably a bad idea. For instance I've never seen many programming IDEs or editors that used super glossy and fancy buttons and such. Technical people tend to hate "fancy" interfaces; most programmers and computer scientists I know dislike interfaces like that; many prefer the plain windows 95 style "classic" theme to the new Windows 7 glass theme or OS X's brushed steel styles.

Your question could actually be quite broad - 'How far do aesthetics affect the way a UI is utilised'.

You've chosen to take two specific past trends in UI design and ask whether the either makes a difference, but I think this is un-necessarily restricting answers. There are a multitude of different aesthetic styles that can be applied to UI widgets.

The aesthetic style of a UI affects the way an interface is received by a user.

Aesthetics matter in a practical sense, because they provide cues about the importance of elements in relation to the rest of the design.

Aesthetics matter in an emotional sense, because they provide cues about who the UI product is intended for, and how this target user fits into the wider world.

Apple recommend in their interface guide for iOs that for productivity apps that is used on a regular basis you should use a minimalistic and clean design in order to let the user focus on the tasks while designing a game you should create a more immerse experience. So you could see it as a scale.

Apple do this with Mail vs their Friend finder app for example.

9
Does it matter if Pagination controls are Left, Centered, or Right-Justified?
10
Are there any project methodologies for UI Design?
48
Are there any recent studies of the "Keyboard vs Mouse"-issue?
9
Counting to Infinity - Are counters usable?
11
Are there any special design guidelines for big touch screens (30–50 inch)?
2
Are there any benefits to using a slideshow for content
0
Are there any good guidelines to how many passwords a user can safely remember?
8
Usability of expandable footers on responsive websites
1
Can Task-Based UI be considered to be slower in context of complex enterprise apps?