Some old mobile phones have switched position of green/red buttons.

Why? That is rationale? Which standard covers this behavior?

Older mobile phones were expected to be used with one hand at least some of the time, and given that most people are right handed, the right position for the answer button was positioned the best for your right thumb to press it.

In more modern phones, people are expected to hold them in one hand and press the button with another (think smartphones). In this case you'd want to present someone with the default action first, and reading from left to right, that would be the left most button.

Let's look at the keypad of one of the most common phones in the world, the Motorola Razr. 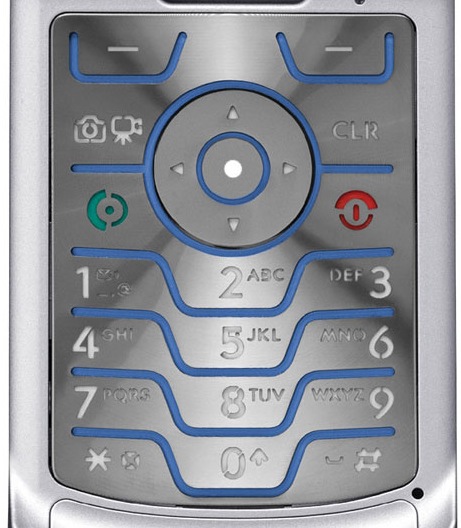 Note the position and color of the Call (green, on the left) and Hang Up (red, on the right). The Hang Up/Cancel/Red button is also often the Power button, as it is on the Razr. Note in this image that the button is styled after the standard Power symbol.

Hundreds of millions of phones look like this, and modern smart phones have adopted some of these conventions (though the call/hang up button are often the same "button" on screen).

If you've seen a mobile phone, you've probably seen a Razr, even in developing nations these phones are common. Their layout has likely become a standard based solely on marketshare.

I think this is one of those things that come down entirely to the designer's opinion, and nothing to do with how many hands you're operating the device with.

Other examples of such seemingly arbitrary design decisions include, but aren't limited to:

That said, it seems to have crystallised on left for positive and right for negative when such a situation applies.

Green on the left / red on the right - has been common for a long time. (Cordless home phones use the same layout).

It's possible that there is no good scientific reason for this and that its just an arbitary convention that a major mobile phone or cordless phone manufacturer decided on back in the mists of time.

Here's a 1992 Nokia with this now conventional layout:

When you want to iniciate a call, it doesn't matter much where the button is, since you are activelly focusing on placing a call. When you hang up, having the hang button inmediatelly available makes the action almost unconscious.

Not the answer you're looking for? Browse other questions tagged usability gui-design mobile buttons keypad or ask your own question.

380
OK/Cancel on left/right?
46
Should the OK/Cancel buttons be aligned right or centered?
55
Submit Buttons on the Left or the Right?
10
Default button OK or Cancel
11
close button on the left or right side?
5
Origin of “big green button”?

55
Submit Buttons on the Left or the Right?
17
Where do you put the delete button if you have delete, cancel and submit?
3
Testing OK/Cancel buttons
5
Origin of “big green button”?
7
Why do many/most (Android) phones have the power button opposite the volume buttons?
12
Volume controls: Why is left down and right up?
2
Differences between Japanese and Western UX, specially button position
6
Placement of primary button in pop up
1
Why do full-screen mobile game ads switch the position of the close button?
1
Placement of Help button: left or right to OK/Cancel