Choosing between a default option and an occasional alternative action

I have an Outlook macro at work which pops up a panel every time you send an email, asking whether you'd like to file that email into various public folders. This is useful and we use it all the time by selecting a folder from a list and clicking OK. The list of folders itself is ordered by the most recently-filed-to folders. That all works well.

However, we'd now like to be able to add functionality to the panel so that users can mark certain emails as being related to a commercial proposal, which means that the email then gets filed into a proposals folder as well as the selected folder.

We've thought about various ways to do this, from having a "Proposal" checkbox on the screen to having two buttons - "File" and "File as Proposal", with "File" being the default.

Given that only about 1 in 20 emails should be filed as a proposal and that users file up to a couple hundred emails a day, in the default case the behaviour shouldn't be annoying, but in the case where emails should be filed to the proposals folder too, it should be prominent enough for users to notice it and remember to do it, or to undo if they forget.

It's quite an interesting problem, a bit like whether replying to an email should default to "Reply" or "Reply All" and how to stop users from doing one action when they mean to do the other action. Users tend to get into a habit when doing this sort of thing.

Does anyone have any interesting ideas on how to build the UI for this or any experience of pitfalls?

Here is a suggestion from a well-known piece of software. This is in a dialog box, so pressing enter just performs the default action, while the other options almost require the mouse to reach.

Con: It could be hard to find the optional actions.

It's quite an interesting problem, a bit like whether replying to an email should default to "Reply" or "Reply All"

I'm not sure that specific example is interesting. The reason being is that Reply will cause no unintended harm, Reply All will and does. Force the explicit choice of choosing Reply All by the user IMHO.

In your specific case I would stick with the current behavior of a pop-up and adding a check box or other UI component within the pop-up which will allow the user the addition of extended behavior. This will stick with your current behavior and allow the user to append the extended behavior at their discretion. Make certain that the check box or other UI component is within the viewing parameters of the user as they proceed through the pop-up. In addition you could explicitly increase its prominence via typeface, or other means to increase the likelihood the user will make a conscious decision to check or not check the box at the time of closing.

For optimal user experience, I would have a checkbox, but I would make it automatically screen the message for signs that it could be a proposal (IE, certain formatting, certain key words or phrases, etc, perhaps it could be done by running a learning mechanism over the known proposals) and then automagically check the box for proposals. Just make sure that the scanner gets at least 85% of proposals, and mis-marks things as proposals less than 20% as often as it correctly marks one (That is, 5 * (total false positives) < (total true positives)

Essentially, because the information of whether it is a proposal is already included in the message, we do not need to re-add it, thereby increasing efficiency as measured in GOMS.

I will go for two buttons. One the label "File" and and "Proposal". Using a checkbox requires the user to click on a smaller hitarea (if you dont use a big hit area).

Standard convention is to deemphasize the unlikely/dangerous action and force a user to explicitly locate and select that option.

iOS does this by emphasizing the default or safe option, letting the other option fall into the background: 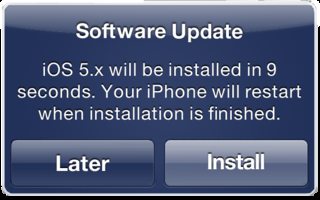 iOS wants you to install their update, so Install is emphasized. If the user is just "clicking through" the dialog (which is alarmingly common) they'll pick the emphasized option most of the time.

Here's a great article on the Visual Weight of Secondary Actions:

To make this distinction clear, you should make use of visual weight. Visual weight is how users compare button priority. The button with the strongest visual weight will get the most user attention.

Not the answer you're looking for? Browse other questions tagged buttons default options or ask your own question.

4
What should the default selected action be for destructive actions in a dialog?

3
Choosing between state and action on video chrome controls
6
What is the best way to display per-tab commands or actions?
11
Is it ok to have "I agree" as the default option?
2
Where to use the default cursor and pointer cursor in button and label?
2
Default radio button option always first?
2
Select from option list and apply action
4
Standard behaviour of dropdown buttons and its styling
14
Which option better communicates the default state for a search box as "everything."
2
"Reset to Default" UI for Computed / Synced Fields
0
How to reset only part of a form?