Scrolling vs. Pagination for a Mobile Order Form

Ok here is my windows mobile application for ordering system. As client requested i added a next page button (the button after the +). This turns a page with preferences of a product. However most of the users that were used to tiny scrollbars prefer a scrollbar at the right instead of turn page. (Maximum times you may press a turn page button is 3-4 times).
Initially i didnt like the idea of the turn page button but i got used to it. So now i can think of two alternatives.. Having a scrollbar at the right when needed or support sliding.(slinding by finger is difficult on resistive screens) but with a pen is easier...

So what do you suggest for my scrolling problem ? I think sliding with pen and a light scrollbar to appear like some android applications to know where you are..

Otherwise a vertical scrollbar.. Also i have to use a scrolling techique for the order items list when expanded... 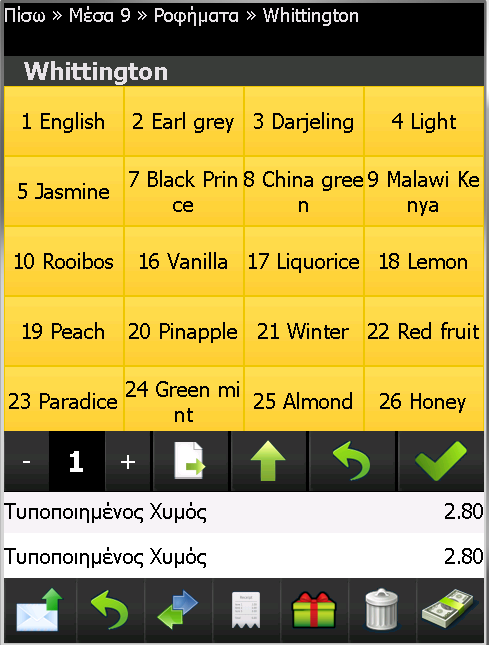 Having to work with UX teams that still have a habit of wireframing everything to death, I find that this question comes up way too often...usually due to the fact that they aren't working with a handheld touch device but rather a mouse and keyboard drawing pictures on a screen.

OK, that's a bit of a rant but the point I'm trying to get at is to pick up a phone and give it some thought. What's not obvious in PhotoShop or on paper becomes fairly obvious in one's hands...scrolling, tapping, etc...are all fairly fast and easy interactions on a mobile device. Which is the opposite of most other devices, where excessive scrolling and tapping can be a hindrance.

In general, allow for scrolling over pagination.

I would recommend allowing users to scroll through them from left to right by flicking their fingers (as that seems to the defacto standard) in scrolling through large lists on mobile phones.

However to highlight the fact that you have multiple options and your offerings extend beyond a single page,include some form of pagination at the bottom page and clearly highlight the page the user is currently on.

Here are some pagination examples for you to think about

You're not mentioning the version of the Windows Phone but I assume it's not a relic and is to be used with a touch screen...

I've yet to see a serious app for WP that does paging over scrolling so my obvious choice is scrolling as it is consistent with other software on the OS. The problem with paging is that you lose the point of focus on the list. With one continuously scrolling page you can keep your focus always on the "same" screen.

Agreed on @Mervin's answer on putting a scroll through left and right as scrolling is the way users already mastered and used frequently not only on windows mobile but other mobiles also such as iPhone and Android.

Resistive screens tend to "jump" when making gestures, they are not very reliable for this. A good arrow to change pages and a nice clicking sound will feel just like home.

Not the answer you're looking for? Browse other questions tagged mobile navigation scrolling pagination scrollbars or ask your own question.

8
In what situations would pagination be perferable over scrolling on the iPhone?
11
iPhone & Mobile Web: Pagination vs. Load more vs. Scrolling
0
How to pan a panel in C# WinForms?
2
Horizontal scrolling of a small area on a desktop website
4
Mobile scrolling report
3
Pagination vs. Infinite Scrolling vs. Hybrid
0
Why doesn't the mousewheel scroll left-right in single-line fields?
2
What is the purpose of slideshow web layouts and how can they be used effectively?
0
Mobile pagination
0
Combining a variable size scrollable list, a fixed size scrollable form and a small fixed size non-scrollable form