I have a table view with some data and I'm allowing users to sort on multiple columns. I wonder what are the options for indicating sorting precedence?

The obvious is to display a number right beside the sorting arrow. E.x like adobe flex does.

What other alternatives would you suggest? I've also made a tool-tip available with sorting information when user hovers over the column header.

It depends on how many levels of sorting you need. I've experimented with using the size of the sorting arrow as indication:

and also with its position:

but these only hold up when you have up to three levels.

It's a nice idea. They way they implemented it takes too much space, but that's because it's also used as the target area for drag-and-drop grouping customization. It could be designed to be much smaller.

Another approach is having the sorting order affect the order of columns, so that the primary sorting becomes the first column and so on. It's a bit aggressive and restrictive, but the principle itself is very easy to grasp and work with.

How about just write it in text right above the table? Sorted by X then Y then Z?

Depending on how much space you have you could just explicitly tell the user what's going on. Here is suggested mockup: 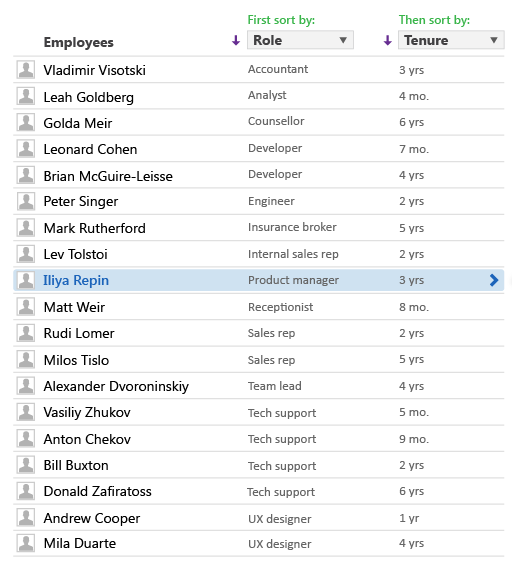 The little purple arrows are butcon toggles which will reverse the sort order when clicked. The user is able to change the sorting dimension by selecting something other than Tenure or Role via the dropdown control.

The only issue with this approach is that you up front show the multi-column sorting set-up, which might really be a rare use case for a lot of users. A slightly different approach would be show the 'first sort/then sort' labels once the user actually chooses a sort order on a given column.

Not the answer you're looking for? Browse other questions tagged usability lists tables sort or ask your own question.

5
How to sort on a single column; OR multiple columns at once
3
Specifying default sort
3
Sort lists on mobile
7
Sorting tabular data using a dropdown menu?
4
Visual clue to indicate table header might be truncated
4
When using tables - is it better to show a sort indicator by default or only after sorting?
2
Convention for sorting within a sort on grids
8
Why is it often not possible to un-sort a table?
2
Best way to organize data table