A button with choices

I have list of buttons that can be pressed or unpressed individually (like checkbox functionality). Some of the buttons can also have some attributes (+ or -), but it's uncommon to select those attributes, the far most common is just to use the initial button values. 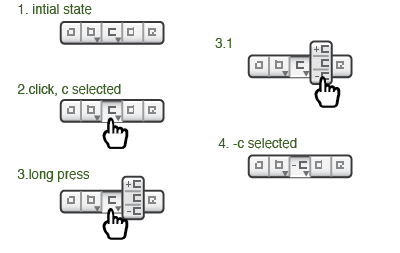 The idea of the design is to let users just click the values they want, which is a pretty fast way of doing the choices. If the user want's to add the attribut + or - (available on "b" and "c") - press the button and after some delay a drop down list appears with the choices.

The disadvantage of this, as I see it, is that I try to merge two standard UI elements - a button and a drop down list, is it intuitive?

Unfortunately I don't have the time to make a user testing scenario to test this.

Example with split buttons (not styled): 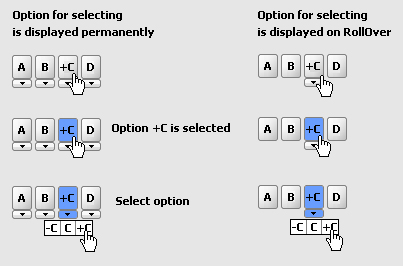 Other approach: The selection of the attributes is displayed when the mouse is over buttons "A", "B" ....

The way you've proposed it is the way OmniGraffle does it, and I've always found it quite intuitive. A few details of their implementation: 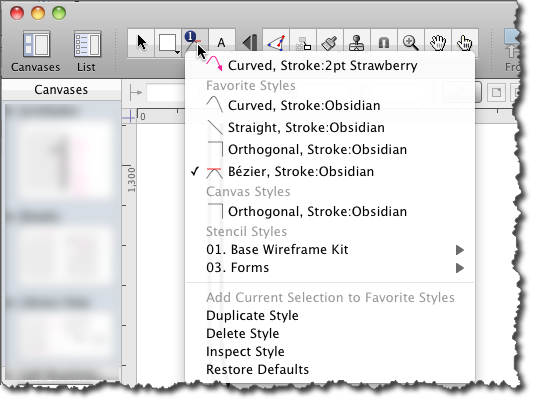 My first thoughts on this:
Is it quite necessary to first hide the options and bring into view only after clicking the button? That can come as a surprise to the first time user.

If the button could include the plus and minus signs above and below the symbol [a/b/c/d] and the UI logic is hidden from the user, that might make it much more intuitive. Perhaps also reduce the number of clicks needed.

Not the answer you're looking for? Browse other questions tagged buttons checkboxes drop-down-list or ask your own question.

4
How to combine “Recent Items” with “Favourites”
1
Forms with Remember Me or Save for Later
5
Changing text on a button twice after action
22
Radio buttons with none selected
6
Checkboxes or Radio buttons: Only one or zero choices
4
Redundant to have “add” and “save” button when adding choices from a list?
0
Button Behavior and when to trigger on release
0
Should a button stay pushed if the user drags their mouse away?
1
Input a lot of data with select vs checkbox
3
How to indicate the ternary options for turning a feature on, turning it off, or leaving it as it was?