What is wrong with this flowchart-matrix design?

I have an application called "Redmine-Bugtracker" with the matrix below. This permission matrix allows users to add permitted status-steps on an issue depending on the current-status of it.

So you see on the left side, in the first column of the each row belong to Gegenwärtiger Status --aka current-status. There are all the steps an issue can be in the form of.

In all the columns for the right side under Neue Berechtigungen --aka new-permissions, you see all the steps you can do if the current-status is the one in the leftmost column.

Now what happened is, my colleagues added a new status step as Auftrag unklar --aka assignment/task unclear. So as to mark a ticket where it is unclear what you should do, when the PMs leave you in the unclear what has to be done.

I was wondering, what is wrong with this UI design, and more to the point, how on earth could this be done better, so as to be less confusing?

How to take some cognitive-load off the user?

I mean, if the programmers can't understand such a matrix, then how could an average user do it?

I'm asking because we have a similar workflow in our application, where the user should do exactly the same as in this example. Configuring (=allowing or disallowing) some status-steps depending on the current-status of some entity.

I'm very curious about how others will answer this, and certain there will be better answers. I'm inclined to assume that:

So I'm thinking you don't need a whole UI redesign here. A matrix that shows all of the possibilities on one grid is a more user-friendly pattern than a workflow builder or a bunch of dropdowns.

What I'm thinking is that you probably should try to guess some good defaults for that "Auftrag unklar" (aka assignment/task unclear) step. At what step do tasks typically become so clear that users wouldn't mark something as unclear in the next step? Everything up until that point can be checked by default. It doesn't seem risky or harmful to accidentally introduce this option into steps that don't need it, they can easily be unchecked.

User research would likely be helpful for figuring that out.

I suspect the problem is that the row labels catch user’s attention before the column labels due to them simply being a vertical list, and my impression is that, at least with this design, the eye tends to be drawn down a vertical list more easily than across a horizontal one. When tasked to set transitions that Auftrag unklar can come from, users thus see Auftrag unklar first in the row labels and work from there. They either don’t notice or don’t recognize the implications of the Neue Berechtigungen label far to the right, outside of their initial glance. I suspect if you tasked users to set the statuses Auftrag unklar can transition into, users would still start with the Auftrag unklar row (correctly, this time).

How would I know what the columns and the rows mean without your explanation?

I would assume that it would help to have "axis-labels" for this matrix:

Now this is obviously just an ugly example, but you get my point.

Or simply add an info text that shows a little pop-up on hover/click with a short explanation: 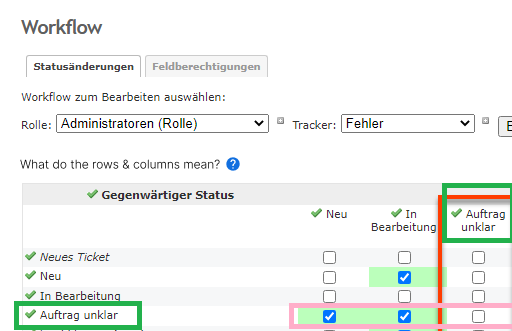 I would suggest playing around with jobs to be done. First of all, determine the frequency of the user having to change values on the horizontal and vertical.

Then maybe play around with some visual differentiation and some kind of preparing the user for the activity he wants to do, such removing cognitive load as: I have added a new status-step "Auftrag unklar". Now I need to do two things. Unlock the issue-status in the tracker

Giving the user the ability to do both things at once might cause the error you described.

Out of the top of my head, I would think of an interaction like in the image. 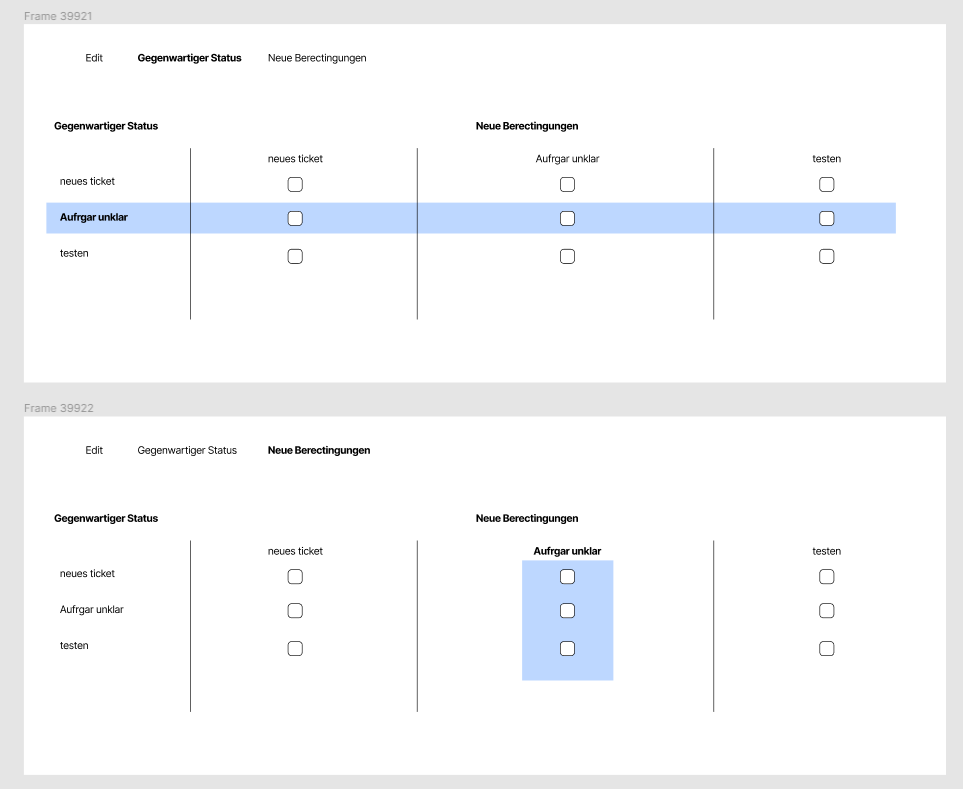 These are suggestions on a minimal understanding of your case. User research would help a lot.

4
Appropriate UI Design for Crossing Matrix
12
What's wrong with this picture?
1
How to design a pane with keywords?
0
"Slider" with relative motion? What is this called?
0
Help with Design Team Dynamic Problems
0
Is it wrong to use a link in this situation
0
what is the design problem with that copier?
1
Is there a name for this flow with deliberately missing information?