I made a webapp that allows users to take on programming exercises: the assignment text is shown to the user, they have an editor to type code, and the code they submit is tested against a test case suite to see if the submitted solution is correct.

I am concerned with how handy and usable to interface I made for that is.

When the user types code and runs it, the results are shown on the right of the editor. 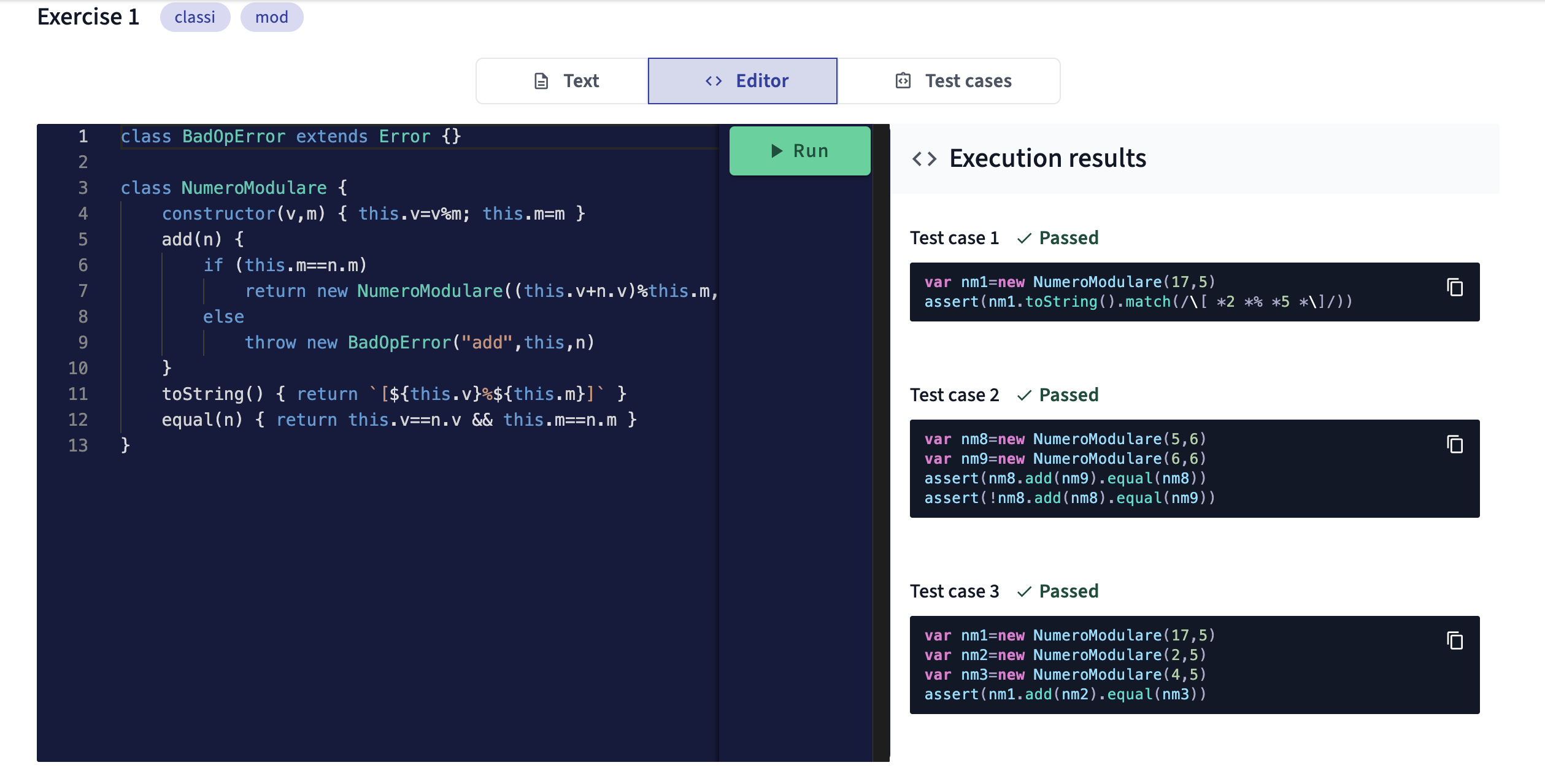 Here's the interface in action: https://youtu.be/LB1Ht6zorbE

I'm looking for a way to make the interface more usable.

There is a lot of content to show the user. Is the division in three panes with tab navigation a good fit for this? I am concerned with the users finding it annoying to have to back and forth between the text and code editor. I tried having the code editor displayed at all times below the text, and have the tabs just switch between the text and the test cases, but I believe that becomes cumbersome to navigate when the text or test cases are very long.

Well, I don't see it as bad as a UX idea, but I would try to adjust some design, mainly spacing optimization.

There's a coherence in the three screens, although maintaining the same width in the work area I don't think it's necessary, it may even be a tradeoff. Personally, I find it difficult to interpret the wide spaces without utility, where the user is forced to scroll vertically in front of 25% of the screen width with information. 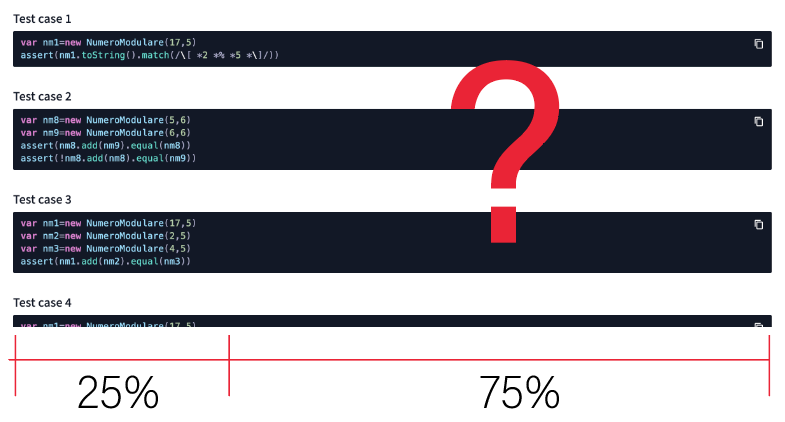 The number of characters per line of the *Text pane* is extremely long, which causes tiredness and errors in reading. In a long exercise, with many symbols a normal reader will probably get lost in one of the central lines, having to read the text again from the beginning.

In general, the optimum number of characters per line in a text is three alphabets, approximately 90 characters. By eye, in the example of the question, the limit of the text box would be after the word "module" in the first line.

While redundancy is allowed in UX, I don't know if it's the same with repetition. In this case, the user only needs to know the number, the rest is unnecessary information (noise) since it is inside that section. It is the same as putting Home on a website as a title on the home screen and then at the top of each section. 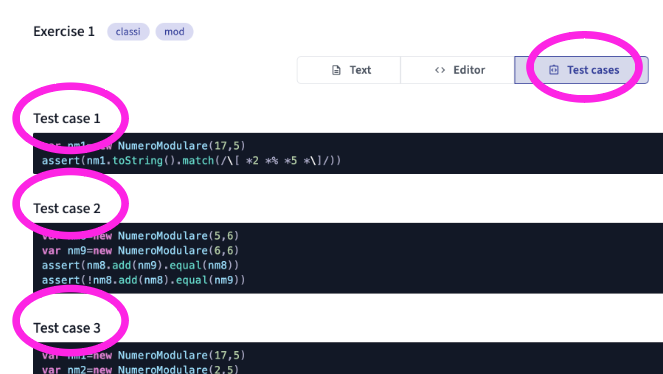 The CTA buttons share only color, size and shape, the rest is position and space contrast: 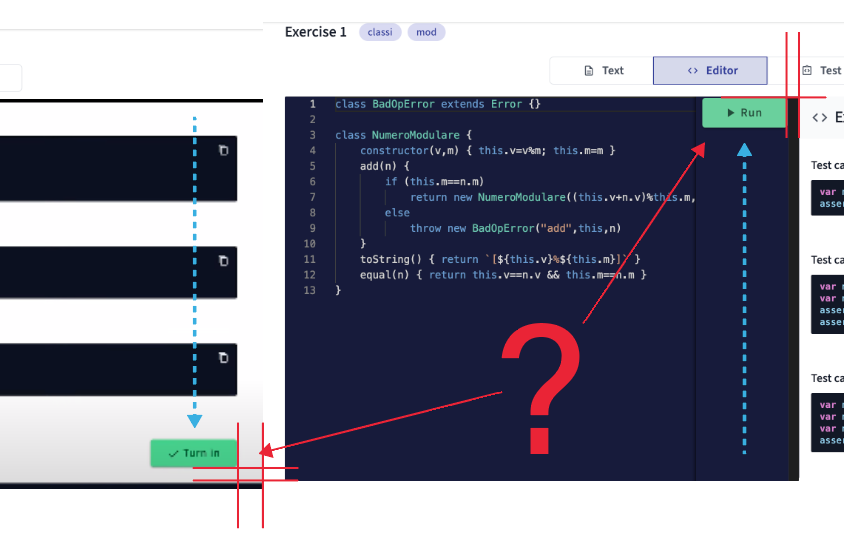 Analyzing the application and in reference to what was stated –I am concerned with the users finding it annoying to have to back and forth between the text and code editor–, I think the most important thing for the user is the development of the exercise, the other three options, Text, Execution results and Test cases are options to display while the exercise is running, so I would try to keep the edit window as a fixed element and the possibility of doing a split with the other three options. In this way, everything is reduced to a single screen, and your concern will become the decision of the user. 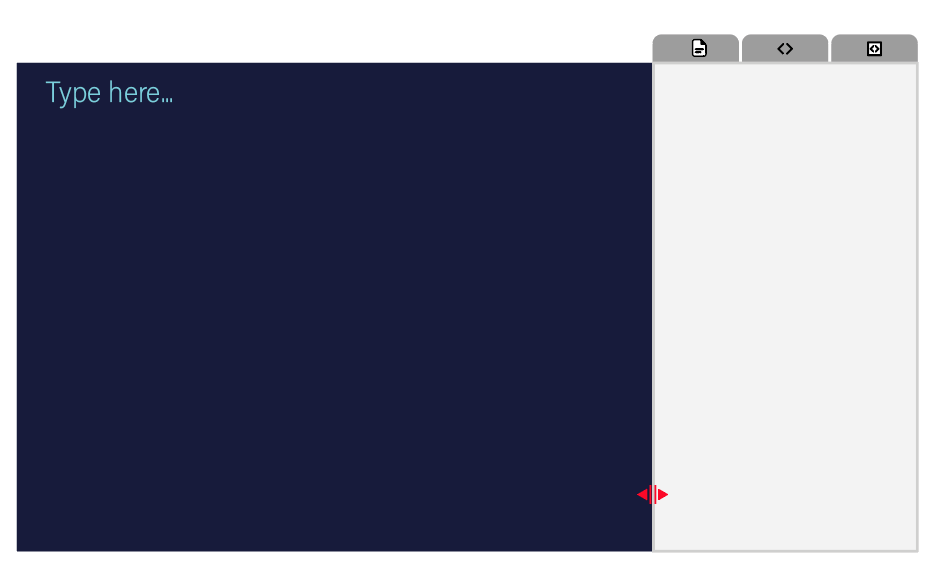 Not the answer you're looking for? Browse other questions tagged web-app editor programming or ask your own question.

0
Should we explicitly alert the user that an operation they performed was successful/unsuccessful, even though it's implicitly obvious?

4
What's up with the Preview Pane? Why or why not to use it in internal web app messaging systems
11
Breadcrumb or tabbed form or best of both?
3
Multi-pane code editor with preview: help me find a good compromise between usability and complexity
5
TAB functionality in SE when editing code -- What's the UX view on it?
0
Best practices for switching back and forth between 'raw' and formatted editable data
5
Is it good to put search box above the keyboard?
0
Should a compiler give compile-time errors or warnings for syntactically valid but logically invalid code?
1
Signify that some input controls map to private information