How to display failed records on a table

I’m designing a screen that contains a table which displays files that have been imported into the system automatically. There is a possibility that the entire file will fail (for various reasons) and another possibility that the file will be accepted but on a few rows will fail while all the others are accepted. The table has separate columns for 'status' (showing the overall file status) and "rows rejected" (the actual rows that failed).

In my design I have the entire row (regardless of use case) visually highlighted with increased font size and red text (I did the larger font in case someone is color blind to red). During a review of this design it was suggested to me that ONLY the fields/cells that are problematic should be red. So if the file failed, then the status field of that specific row would be red and the rest of the row would be our standard font color. If the file passed but there were some rows that failed, then the row would be standard font color and ONLY the ‘rows failed’ field would be highlighted red.

I’m not sure which is the better, now that I’ve had time to absorb the feedback and think on it. Does anyone have any suggestions or rules of thumb for something like this? Should I stick with highlighting the entire row or should I focus only on the fields in question?

usability user-expectation data-tables
Share
Improve this question
asked May 3 at 18:27

Build in indicators at both the row and the cell level.

You can use two types of indicators in this case.

This can be a persistent element that relies on consistent position, color, and a symbol. Adding to the left of the table (like an invisible column that appears) allows a user to quickly vertically scan the list, to see overall how many rows need correction.

This allows for the exact values to be corrected. It's important to have both, because in a long table, some of the cells might not fit in the viewport without scrolling horizontally. The row indicators will tip off the user that somewhere in the row (maybe offscreen), there's a need to correct a cell. 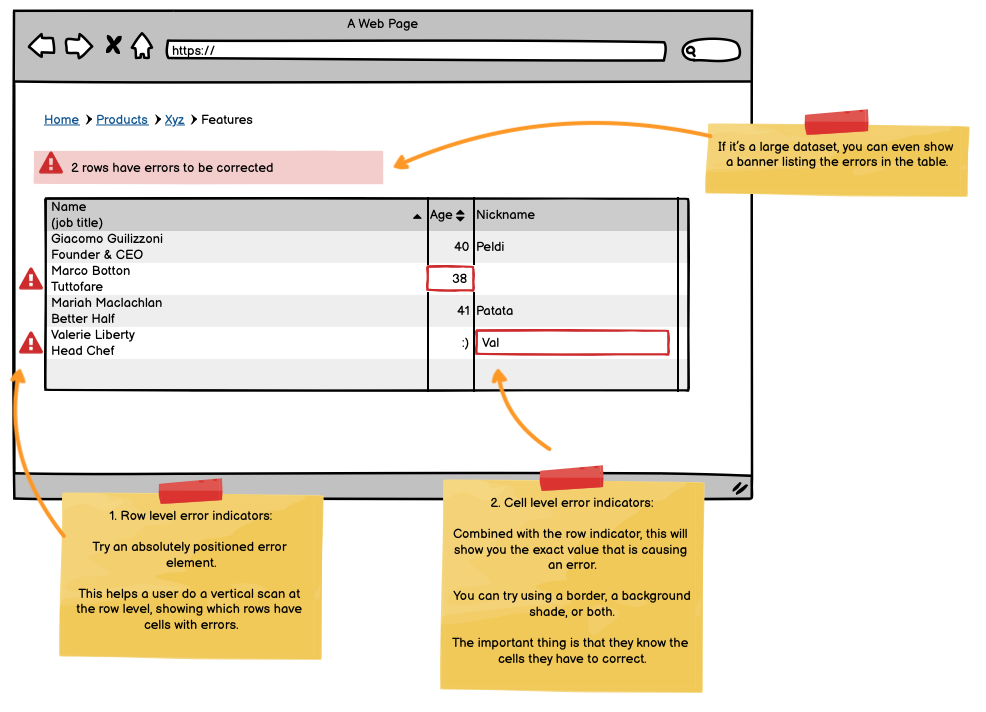 I would interpret the problem from the user's point of view, what's the easiest way to solve the problem using the rule of What? How many? Where?. In file uploads with the possibility of error in different areas, it's important not only to show the error but also to indicate how many they are, something not contemplated in the question. This makes it easier not only to find them but also to have an approximation of the time to spend on solving them. If my file has five complex errors and I need to finish a task, I leave the review for later. Instead, if it's just three simple errors I can try again immediately.

It's always useful to show where the exact point of the error is: the cell. But, if only errors per cell are displayed, we force the user to navigate the entire table until they find the red text. The path becomes more immediate if we indicate in which row the cell with the error is.

My idea would be the following: 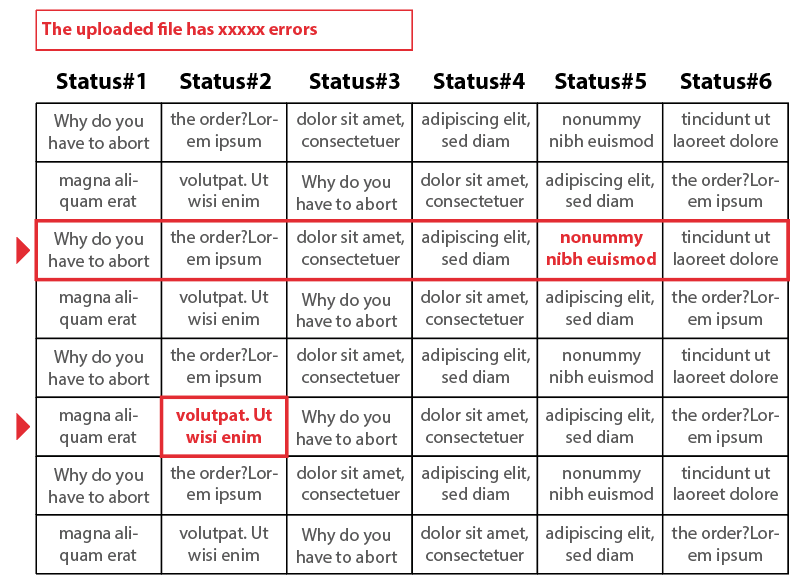 Not the answer you're looking for? Browse other questions tagged usability user-expectation data-tables or ask your own question.

13
Zebra striping in dynamic table
1
What is a good visual way to show if a person has entitlements to Edit a table row?
3
Do I need an extra checkbox column in the table
0
Displaying the contents of a file of indeterminiate length
2
How can we make a data table with 12 columns more usable?
17
In a static data table, should rows be highlighted on hover?
7
How to best present multiple statuses in a table?
0
Use of clickable ellipsis in data table row
0
How to best display the contents of a flat JSON file
0
What is the best way to communicate a required selection within in data table?