A special case of tree-view/collapsible panels

This might be considered a sort of special case of the issue described here: Which way should arrows point in a collapsible accordion? Left/down … down/up?

I have this scenario: 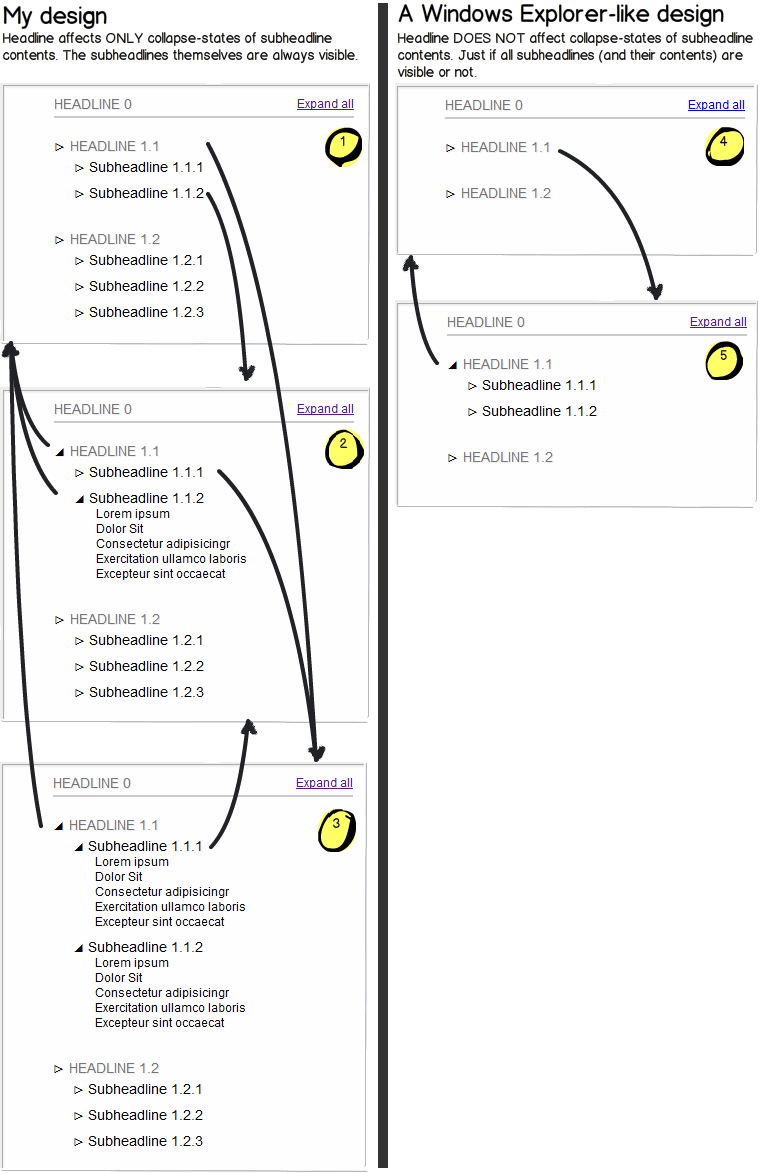 As can be seen in the illustration, my current design is inconsistent with the approach taken in Windows Explorer (and OSX Finder for that matter, just with other arrow icons).

So my question is:

I would not use a treeview. (A) Use HEADLINE 1.1 and HEADLINE 1.2 as a headline with the option "EXPAND ALL". Below you placed the tree with the collapsible SUBHEADERS. (B) There are too many elements then you can also split the tree in 2 views (first is a list and second a tree).

The triangle expander control you are referencing here is described by Microsoft in their Progressive Disclosure Controls Guidelines. This particular control is the only one that displays in it's Present State (as opposed to the 'future state' i.e. the state it will be in when selected) this is because it (apparently) resembles a rotating lever so shows the direction in which the action occurred.

Purpose - Show details: Show or hide additional information in place for an individual item. They are also used to expand containers.

Appearance - Rotating triangles somewhat resemble rotating levers, so they point in the direction where the action has occurred.

Not the answer you're looking for? Browse other questions tagged interaction-design design interactive-ui collapsible-panels or ask your own question.

40
Which way should arrows point in a collapsible accordion? Left/down … down/up?

2
Better paradigm for a Blender-style interface; lots of control panels and property panels
5
Which UI is more user-friendly and effective: Tabs or Collapsible Panels?
4
Should I use Collapsible Panels on Landing Page or something else?
1
Best approach to presenting collapsible/expandable panels with radio button headers
4
What is a good design choice for two collapsible panels on the left?
4
Is there a downfall to using collapsible panels for a contacts list, rather than linking to an additional profile page?
3
Form with locked and unlocked controls
0
Expanding and minimizing panels on a Dashboard
0
Problem with 3 or more level of tree-view UI on Mobile
3
Where should you allocate the edit and delete buttons in collapsible panels?