Should fieldsets be nested for yes/no questions?

The first one, means "Do you like food?" will contain more than just the radio-buttons to answer that question, but it also means it's possible to "drill down" into that "group of related questions", which I've found to be helpful when testing with e.g. findByRole('group', ...). But I don't know if it would be equally helpful for people using assistive technologies, or if it would actually make it more confusing.

With the second option, it's not possible to "drill down" into the groups, but each fieldset with a question in the legend only has the radio-buttons to ask that particular question.

Any advice? What is "most correct" and best ux here?

Added: Screenshot of such a question on a (norwegian) website. The first question is a yes/no question. The second question only appears if the user selects "yes" to the first one. Since the fieldset doesn't have any frame or padding, it looks the same whether the second fieldset is inside or after the first one. 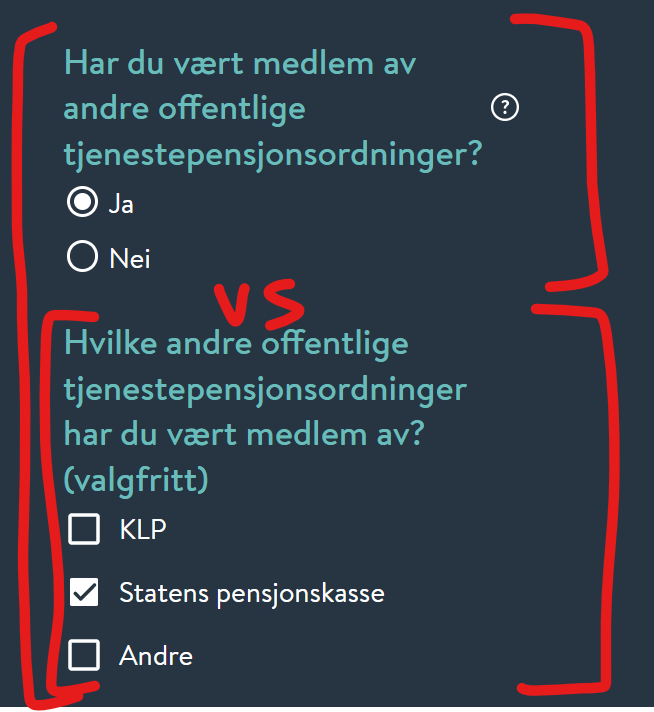 From an accessibility perspective, it would be better to not nest the fieldsets. Some screen readers announce the <legend> for all parent fieldsets. For example, with JAWS, if you tab backwards through the form in your nested example, meaning you tab to the "What's your favorite food?" <input> field first, you'd hear:

This doesn't happen when you tab forwards with JAWS (???). Not sure why. But it shows how it might sound confusing in some situations.

You don't gain anything by nesting them compared to having them separate.

(Note: I had changed the <label> on the <input> in your example to have the closing </label> after the <input> so that the label would be correctly associated with the field. That was probably just a typo in your original example because you had the labels of the radio buttons correct. But without that change, my third bullet point above would just say "Edit, Type in text".)

Changing the setting of any user interface component does not automatically cause a change of context unless the user has been advised of the behavior before using the component.

Where "change of text" includes

So you'd want to be clear to the user that answering questions might cause other elements to appear.

The same is true even if all the form elements are visible but they are currently disabled until the user selects certain elements.

Not the answer you're looking for? Browse other questions tagged forms accessibility or ask your own question.

1
Best Practices on toggle switches and defaults in forms?
2
Should I use questions or statements in my web form?
2
styling of required fields
7
Should tags be inside or outside the input field
1
Is this a good concept: "Select one or multiple items using checkboxes and use a radio button to select all"?
2
'Yes to all' or 'No to any' with multiple individual questions - The best way to present to the user
1
How to make nested input groups more iniutive
3
ATM Style Input Fields for Currency
0
What markup should I use for a form confirmation page / last step in wizard?