Is it good UX to show, or notify, users about deleted messages in WhatsApp?

Is it a good user experience for sender as well as the receiver of messages in any messenger app (here WhatsApp) to show that there were or was a message(s) deleted? 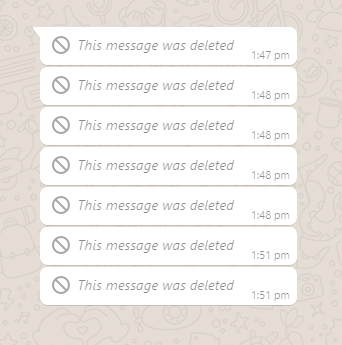 If I send a message to anyone and delete it before the receiver read it but due the messenger's (WhatsApp) SOP the receiver now knows that I have sent and deleted any message or messages. This puts me in an awkward situation. Now I have to give any excuse or even lie to the receiver.

Is it not so simple to not show the message "This message was deleted"?

IMHO, this feature not only just lends itself towards a terrible UX for the recipient but also encourages senseless and lazy message sending, i.e. discouraging the need to review messages before them being sent.

I personally absolutely hate this feature as it immediately makes me wonder:

... leading to an endless spiral into the depths of paranoia, which will then ruin one's day/week/month/year...

So, in short, I think is it one of the worse recent additions to the instant messaging universe.

If the addition of a message delete function was absolutely necessary, then it should be deleted without such fanfare. This way, if I wasn't using my phone at the time of deletion, then I wouldn't have been made aware. If I was actually using my phone at the time, then I would have seen a message being deleted (and so, no worse off than the current situation/implementation).

A much better implementation would be to make it configurable, on the recipient's side:

The sender would then receive an indication (via an icon next to, or overlayed upon, the other person's avatar) of the recipient's deletion status, so that they are aware of how deleted messages will be handled at the other end.

Deleting the message without a trace is insidious and ripe for abuse. The recipient might see the message in notifications, and then wonder why there's no trace of it in the chat log.

Delete feature can be useful in several cases, for instance when you write a lengthy request describing an issue, which is no longer relevant. You don't want the recipient to read through a bunch of text, and then see "oh, sorry, please disregard". Another use is that messages can form a permanent record of sorts, and you might want a way to correct mistakes beyond "that key bit of info I gave you 10 messages ago, that was wrong, here's the correct one". Without the delete feature, they might search for that info months later, and find the wrong one.

I think Zoom did a great job on showing this message. In Zoom Chat, the deletion notification will only expose to the user who deleted the message (1:1 chat). The receiver will not see anything if a sent message is deleted. It somehow avoid the awkwardness...

Every function has its own necessity of existence. I use WhatsApp and WeChat, they have "delete/recall message" both. When people are communicating at a high frequency, some wrong messages may be sent, so the function appears.

Not the answer you're looking for? Browse other questions tagged mobile-application chat or ask your own question.

4
Handle Push Notification when app is in foreground
3
Do fine-grained message statuses (such as when a message was seen) help usability?
0
When to notify users via email vs onsite
4
Should new users in a message thread see previous messages?
5
Whats a good way to show that a user gets a free coffee in a loyalty app?
3
New Message Notifications and Unread Message Counts across Clients
5
In what order should chat messages be shown?
2
What would a solution in surfacing good chat messages from Video Live Chats look like?
4
Is there a proper way to let users know about known issues