When to use split button vs more options button?

When do you typically use split buttons vs a button with more options (ellipsis)?

From how I understand it, split buttons are for grouping related options with one most common option surfaced?

According to the Windows 7 User Experience Interaction Guidelines, with a split button, “users click the triangle to display variations of a command in a drop-down menu” (p872)

Given there is no standard for an ellipsis button, what could it mean to the user?

Generalizing from the Standards

So, this implies that an ellipsis button provides the user with the ability to provide more information about how a command is performed, probably through a dialog, since that’s what ellipses usually mean and it distinguishes the behavior of the ellipses button from the arrow button. 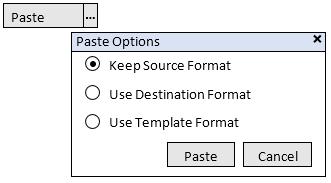 However, the Win 7 standards themselves point out (and this example demonstrates) that using the split button instead is often “a simpler, more direct way to present the options” than using a dialog. So why would you ever want to have an ellipsis button?

Well, maybe if the additional information is too complicated and varied to reduce to a list of menu items. Maybe something like this:

But even here, you'll usually be better off having split button with menu items for the common simple variations, and also a menu item to access the dialog for the (rare) complicated variations: 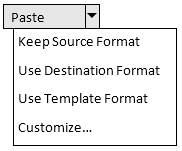 The need for the dialog should be so rare that it’s okay to require two clicks to get it.

Bottom line: I can imagine a use for an ellipsis button on a bipartite command button, but it should be so rarely needed, I would avoid it as non-standard, or, at least, only use it if usability testing showed users understood it well.

Who is Using Ellipsis Buttons?

So maybe some designers are treating a single command button as a command bar with one visible menu item? If so, that makes the ellipsis button synonymous with an arrow button: it shows more commands on a drop down. That’s an irregularity we don’t need. I’d avoid it.

Not the answer you're looking for? Browse other questions tagged gui-design buttons human-interface-guideline or ask your own question.

5
Dropdown Button and disjunct options
1
Opposite actions combined in one split button
4
Usability of vertical split bar to resize splitted view
3
Button group behaviour - defaults and toggling
1
Pattern for showing the dependency with dependent fields below a radio button or checkbox?
9
Split button pattern - evidence on usability?
94
Is it possible to make a "good" options dialog?
6
Is a split button valid without proper visual grouping
3
What Micro Interaction to use When Hovering Over a Button?