Is it a good practice to change the colors of a brand or logo without changing the logo itself?

We would like to change the colors of our visual identity, brand and logo. However, I don't know if it's a good practice to change colors without changing the logo design itself. I remember several companies that changed the colors and the logo, but someone who only changed the colors doesn't come to my mind. Does anyone have any examples? And would anyone be able to tell me if it is good practice, bad practice or indifferent?

EDIT: I'm not talking about temporary change or change to fit some context, like a commemorative date or tribute. I'm talking about changing the main colors of the brand, like a rebranding.

I separate the answer into three aspects: conceptual, functional and technical.

A corporate image has ceased to be a static element years ago due to various factors, including the influence of design styles and adaptability to new media.

At the end of the 80s, a style emerged that completely disrupted all the visual arts called deconstructivism, whose main characteristic was to question and challenge all the established fundamental precepts of each discipline. In graphic design, the main action was to deconstruct any dogma concept: static corporatism, readability, balance, Gestalt, among others.

A clear example in corporate image is the change applied to the MTV logo in each screen appearance: 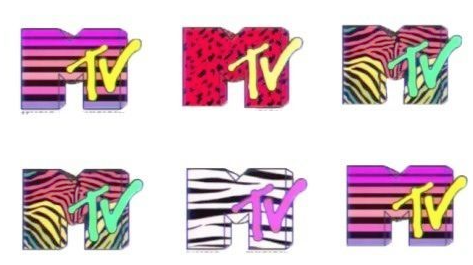 Although several years have passed, deconstructivism left its wake and many of its stylistic bases are still maintained as references. Currently there are some references such as flexible branding, liquid branding, which without being clear design styles, point to the same idea: adaptability.

In its origins, corporate design was only considered for static applications, mainly printed, and on rare occasions applied to media, film and TV or architecture. With the time these media have multiplied so the design had to adapt its presence to them. The increasingly used moving image, 3D design, the internet, and lately applications on devices made corporate design have to adapt. The clearest case is the responsive logo as explained in this answer: variations in design adapted to different sizes and orientations. As for color, the change is given by the different physical and virtual supports to which the corporate image must adapt.

How should I make a logo adapted to different color schemes? Obviously much better if the change is defined as a corporate guideline. The Carrefour supermarket chain presented its new corporate design in 2009 with a considerable number of colors and gradients to be used in its different communication needs (extracted from this answer). 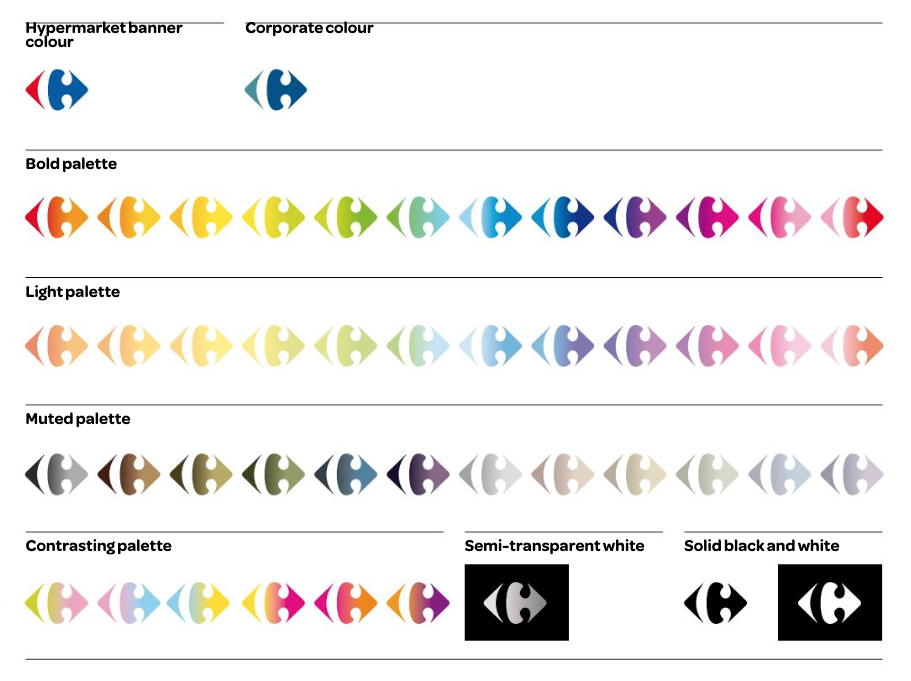 If the corporate design guidelines are already defined, color variations can be added as an annex without the need to modify the logo in terms of shape.

Personally at the corporate level, I would consider a basic range of colors, trying to vary only the hue and relegating changes in luminosity and/or saturation to a second or no change at all (the Carrefour page is only an extreme example to illustrate the answer). A simple practice after making the color variations, is creating a document with all the logos and their colors, changing the document to grayscale, and trying to make the black, dark and intermediate grays suffer only slight variations, the jumping between the grays from one logo to another be the smallest possible. Although this is not an absolute dogma either. 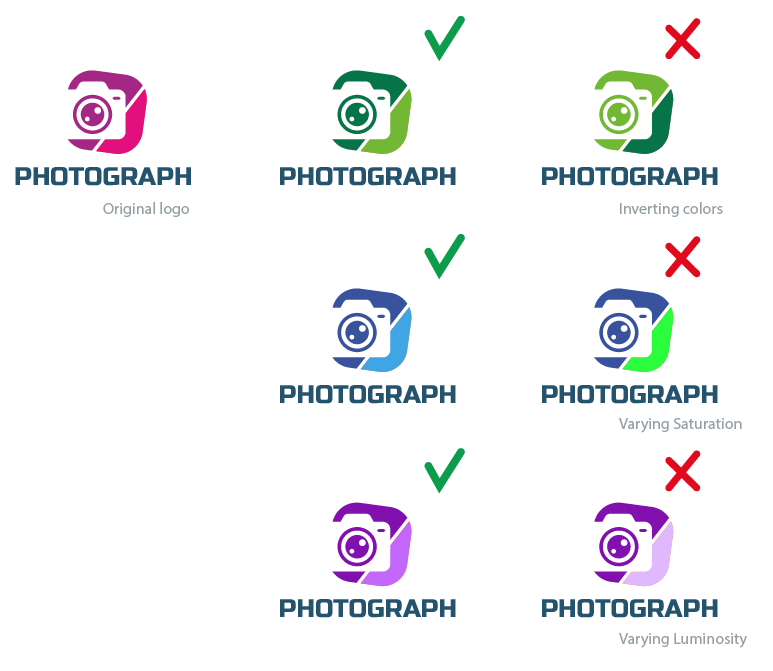 Not the answer you're looking for? Browse other questions tagged design branding logos or ask your own question.

1
What is a good reason to tell clients who want their logo to be always included in every screen that it shouldn't be done for a mobile app?
1
Should submit button colors match color scheme or be consistent across products?

3
What should a "wizard" style interface on the iPad look like?
14
Best practice for brand/logo change in web UI
3
Where is the best position for company logo in services login page?
3
What is a good definition of simplicity that can be applied to user experience?
35
Is UX design with the intent to change user behaviour without their permission or consent ethical?
1
Is it a good idea o use the link on the logo to display a sup-header with navigation options?
0
How to 'pretty up' an ugly piece of industrial design for electronics
0
How social icon color impacts usability?
2
User interface of car's entertainment systems / GPS