How to reset only part of a form?

I have made an ESP interface which contains a settings page for an ESP in which the user can change various settings.
I have developed both front and back ends.
I have divided the page into several forms, each corresponding to a functionality of the ESP.
I store the settings in a json file. Every setting has a default value. 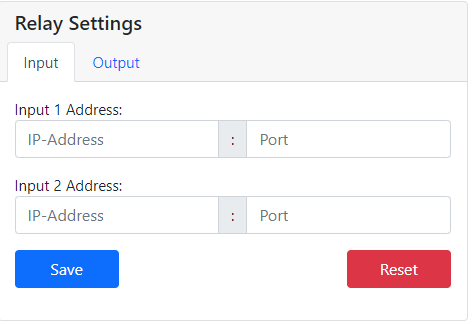 Whenever the user presses Save a json similar to the one above is sent to the server. If an input is empty, say ip_1, it will be sent as: "ip_1": "" inside the input object alongside the other keys (port_1, ip_2, port_2). The server ignores received empty values. This is done so that the user can update/change each setting separately.

I want the user to be able to input new values, update/change the previous values and reset the value to nothing/default (let's say the user won't need to use the INPUT functionality) and be able to do any of the previously mentioned actions for each individual input (ip_1, port_1, ip_2, port_2).

But what if the user decides to stop using the Input functionality ? If the user hits Save with empty inputs, the values will not change.
This is why I have thought of a Reset button for each form, but after placing it in the form it looks veeeeeery ugly and most probably it will confuse the user.

Lower in the settings page I have a form called Factory Reset with two buttons:

But I can't let the user reset everything each time he doesn't want to use some functionality.

How should I handle this ?

What you're facing is more of a technical challenge than a design challenge. Ideally, your data structure should be such that it should be able to handle the differentiation between an empty state and a dirty state.

The solution that comes to my mind is maintaining a data structure akin to the Delta JSON structure that Quill JS uses.

While it doesn't align with your ask 1-to-1, given that the Delta is capable of handling changes to complex rich-text data, you should ideally be able to create a simplified version of the Delta data structure to address your problem.

Not the answer you're looking for? Browse other questions tagged forms buttons or ask your own question.

21
Guidelines for when to auto-save settings vs "save" button
0
save, save as, load, reload buttons
1
Multivalued form field and validation for empty values
0
Error message for "already submitted" in signup form
2
UX: Whats the difference between Save and Apply Buttons?
2
How to design a form with lots of possible values
0
Reset values of hidden part of form
1
How to best combine browser and custom autocomplete functionalities?
1
Is it okay to save data only when user leaving screen?
0
How to handle form validations when the Cancel button can lead into an incorrect state?