Which is the best control for a digital checklist?

Designing an application that has a checklist for workers to fill out before starting routine Maintenance work. this includes a list of 10-15 safety checks. this will be used on an android tablet on site.

My question is what's the best control to use for the checks.

What other considerations should I make to decide this?

If it were a personal project, I would consider some fundamental points to take into account when choosing a design option:

Being the case, my main decision would fall on the visual contrast between each choice and the global set of options so that it's exaggeratedly clear which ones are chosen and which ones are not.

I see better clarity and higher contrast using simple radio buttons. In my opinion, the toggle buttons have unnecessary visual information for this case. 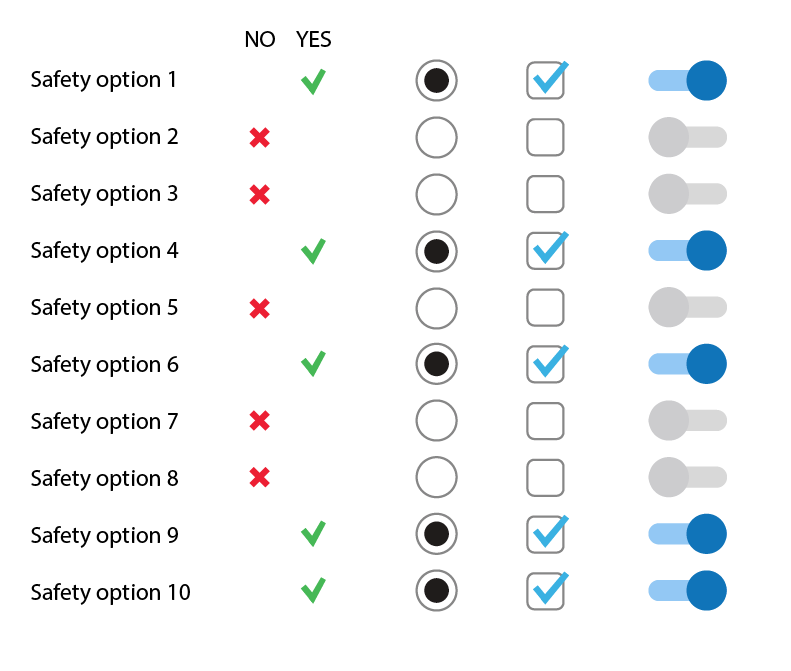 A pair of Pass/Fail radio buttons can start off empty (unexamined) and then be completed with Pass or Fail as appropriate. You could implement a repeat click as "Clear": mark a Fail, and remove that mark and go back to "unexamined" by clicking Fail a second time.

Note that radio buttons should never actually be clear, but it's a convenient state in some circumstances. And even physical radios which had these selector buttons could be carefully set so that nothing was selected. However, this is in effect a third state so there could be three radio buttons for Unexamined/Pass/Fail.

Do you need the "unexamined" state to be different from the "Failed" state? If you do, you can't use controls which don't provide that distinction.

If the goal is to make the "Not Done" items stand out so that they can be addressed, you might even want to move the "Done" items to another section.

It could work roughly like this, where the user clicks a Done button once the task is completed:

I see it from the interaction perspective and take hints from the wording. They do "security CHECKS" I'd go with"CHECK" Boxes. It's in the name.

Radio buttons are designed to have one of multiple states. I guess there is only one acceptable state on a safety checklist right?

How did they do these checklists before there was this app.was it a paper form? You can and should stick to the "control" used on the paper form.

Not the answer you're looking for? Browse other questions tagged checkboxes radio-buttons toggle checklist or ask your own question.

6
How to present an optional binary choice without a preset value?

12
How to best represent a ToggleButton (representing on/off) with the ability to be locked
11
Multiple choice with Yes, No and 'No answer'
10
Indeterminate state for toggle buttons?
2
Check-boxes vs. Icons
3
What is the best way to gather optional data using radio button groups and drop-downs?
1
Best Practices on toggle switches and defaults in forms?
1
force a user to fill out a check box so they don't skip the question
2
Why does this UI (Google Translate) have a set of toggle buttons instead of radio buttons?
6
How to present an optional binary choice without a preset value?
0
iOS list with checkboxes and radio buttons alternative