I have the current situation: I need to associate items from two categories (let's call them "Recipes" and "Steel Grades") based on a range of numeric values from another category (let's call it P).

Can someone help me present this is in a nice, simple way?

The first thing that comes to my mind would be an editable table with four columns, "Steel Grande", "Min. P", "Max. P" and "Recipe". The user would add rows to the table and fill them manually. However, I think the usability would be terrible; imagine if a new recipe would be added for range 7%-8%: besides adding the new range, the user would have to edit the existing min/max values from the other ranges (since there should be no overlap between ranges).

(This system is used exclusively in desktop version, so there's no need for mobile functionalities.)

EDIT: I'm adding some images as an example to my original idea. 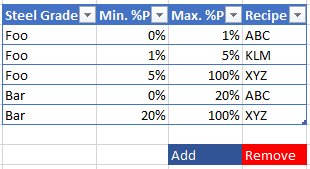 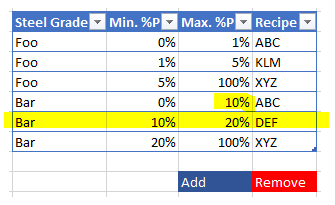 (note that a new row was added, and the existing ones were updated so we have those ranges covering from 0% to 100%) 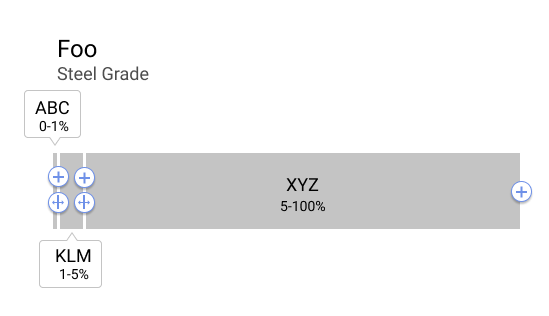 If that is not in scope, you can always switch the percentage inputs in your table with dual range sliders. Then I would add validations that highlight the row if two sliders overlap.

Not the answer you're looking for? Browse other questions tagged tables range or ask your own question.

2
About the creation and management of items
2
Table/grid design for website when a rows column has multiple values
2
What's a good control for allowing a user to define colours for numeric ranges?
0
How to indicate insertion of a new record into table with pagination
1
A User-Friendly Table - What Solution?
1
Data Display of Tables: Table Cells with Must-See Values
4
Selecting Multiple Ranges From a Single Range
0
What options are available for indicating an uncommitted delete row operation in a table?
3
Comparison of data tables
1
Value input for several dependent ranges