Does an on/off switch still means on/off when positioned horizontally?

I'm working on a custom piece of hardware where a fan is turned on and off automatically. The user can override the decision of the automatic system through a switch. Activating the switch when the fan is on will turn it off, and vice versa.

Is it a valid choice to use a toggle switch (see the image below) for that, if the switch is positioned horizontally (i.e. the handle facing either left or right)? Or should I use a button switch instead?

Those switches, when put vertically, are usually associated with on/off actions, where the handle pointing upwards means something is turned on, and when it points towards the floor, it means the thing controlled by the switch is off—although, in some countries, the opposite may be true. In my case, however, the actual position of the handle doesn't mean anything about the current state of the thing under control; instead, the switch acts only as a way to change the state. 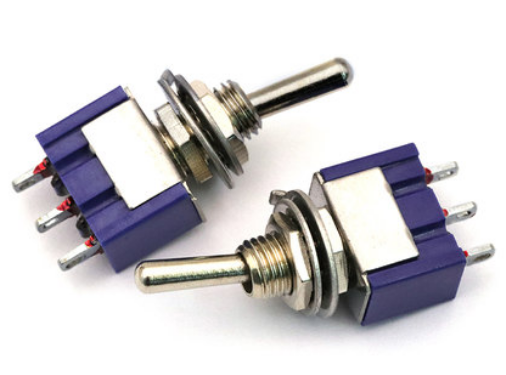 As the question attracted much more attention that I was expecting, here are a few details about the aspects which were originally unclear. I add them here instead of editing the question itself in order to avoid invalidating some of the answers.

While the user can override the decision of the automatic system, such override is limited in time. There are two goals for that. The first one (which should be quite common) is to prevent someone from turning the fan off, and forgetting to turn it back on. Or force it to stay on for a long time, when it may not necessarily be needed. The second one (which should happen rarely) is for the automated system to take the control of the fan back in a situation where appropriate. For instance, if the user decided that he wants a quiet environment, but one minute later the system starts overheating, starting the fan would be an appropriate response from the automated system (the other would be to cut the power to the whole system—this is definitively not something the user would enjoy).

This makes it impossible to use on/auto/off switches, unless they have some sort of a reset feature where the automated system itself can toggle the switch back to “auto” position. A possible option would be to use two push buttons, “on” and “off,” and three LEDs indicating the state of the system, only one LED being on at a time.

The design of this part of the system should not take in account the users who want to actively harm/hack it (by manipulating it to permanently switch the fan off, for instance). In fact, if the system is brought into a risky state, it would cut the power to itself. Turning it back on would require a manual action of a technician.

Right now, the three solutions are:

I think your assumption that vertical switches are always up=on and down=off is wrong. In instances where two switches control the same thing then it is very easy for them to get out of sync. For example, consider the switches for the upstairs landing light in a house (at least in the UK).

When using switches like this, you quickly learn that there is no definitive logic to which direction is on or off. Instead, you learn that pressing the switch (in either direction) will toggle the device it is connected to.

So my suggestion is: do not worry about it. Use a vertical switch if that is convenient for you. The user will quickly learn that there is no fixed position for on/off, they will not struggle to understand how to use it. They will simply know: if the fan is on, and they want if off, then flick the switch.

If you want a switch that doesn't show any "state" at all, then use a simple button, as it always looks the same regardless.

You're possibly using a two-state switch to control three states:

"Activating the switch when the fan is on will turn it off, and vice versa."

The switch itself seems ambiguous. It might be better to use a control with more obvious signifiers. 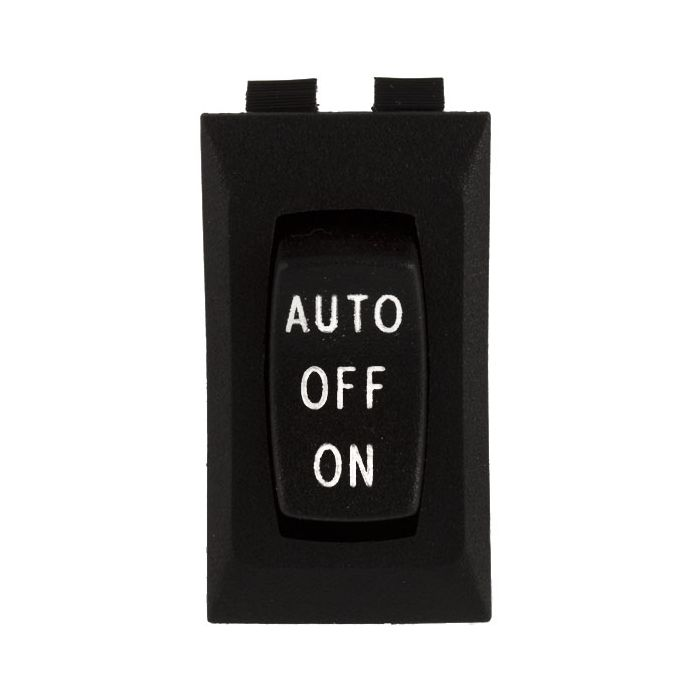 Having a single control introduces the risk that the automated system commanded a change of state immediatley before the user did, but before the user could notice. the user would then be required to deterime if the fan is slowing or not to decide whether to revisit the control.

I think two buttons "pause fan" and "run fan", is the best match for your use case. as the user can be confident that they have not just countermanded an automated choice that already did what they desired.

Alternatively a self-centering (momentary) toggle sqitch could be used with "run" in one direction and "pause" in the opposite.

Horizontal or vertical is immaterial. There is no "standard" or "expected" behavior. At no point should the user ever have to assume what the switch does in one position or another. The device should always have clear labels indicating which direction does what.

In your case, there is no clear, simple set of labels that you could use that describe what each direction does since it depends on the current state of the fan. That's a hint that this isn't the right type of switch. Based on your description, you need either a pushbutton or a momentary toggle switch (after you flip it, it flips itself back). You would label this switch something like "override" or "fan toggle". When activated, it would override the current state of the fan.

If the automated system puts the fan on, it's presumably because some condition has warranted it. Temperature, say, for example, has hit a threshold. So if the user then turns the fan off, how long does it stay off? Forever? For some length of time? Until conditions change by some amount (temperature increase to a secondary threshold?)? Conditions exit the threshold state, and re-enter? If the user turns the fan off, and then on again, is it now under automated control, or does it stay on forever?

The workflow that you describe makes things really, really ambiguous. The "on/off/auto" switches are the way to go, if you really want user override of an automated process. Basically the fan is unambiguously under automated control, or manual control, at any given moment.

Or maybe what you want is a variable control that changes the threshold, so that the user can set the temperature (or humidity, or gas concentration, or whatever) that the automated system uses.

I would suggest a modification of two existing answers is best here. A 3-position, self-returning switch. Not sure the technical term, but it can be called a momentary switch or a spring-loaded switch. 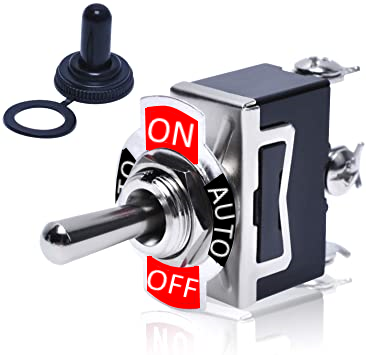 Image taken from Amazon and modified for labels.

It's electronically only a 2-position switch. Up activates one output, down activates another output, and center is just a float position where neither output is active.

Unlike the 3-position toggle switch, it's immediately clear that On and Off are momentary inputs. Also, repeated attempts to manually turn the fan off don't require manually resetting to the middle position.

If the fan is distant or quiet, some type of indicator would make it clear to the user whether the fan is currently on or off. A malfunction indicator could also be placed here. 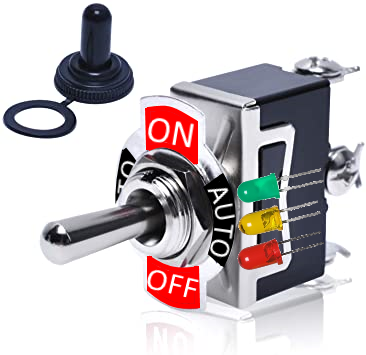 Here, we have green for "fan on", yellow for "fan off", and red for "fan error". If you have another location for your error lights, or no error-sensing circuits, the red light could be omitted. I would also explicitly label the indicators.

I would personally avoid red for "fan off" because I associate that color with a bad condition. Yellow tells us the fan is working, but idle. It also lets the user know the system could come on without warning, instead of indicating it's completely shut down.

You could omit the yellow light entirely, but it might be less clear what's happening, and having an indicator for each state means a loss of one bulb still lets the user figure out the state.

There's no reason you can't put the switch horizontally. I think it's less standard that right is on, left is off compared to vertical positions, but it doesn't need to be vertical

I would suggest it's more typical for right to be on, left to be off, but I can't find any good studies on the subject. The trucks I've seen use switches that way. Android interfaces do that. I believe iOS does as well. Most video games I've seen have it that way. Maybe non-Americans do it differently, so if you're from somewhere else I'd look up local conventions.

No, a switch should not invert an automatic system if the switch is expected to only turn a fan off. If the direct intent of having the switch is it to invert a specific state then it should be labeled as a invert function.

If the question is literally the title then my answer is: In my experience the commonly expected orientation for a on/off switch is vertical though not exclusively the case.

Not the answer you're looking for? Browse other questions tagged physical toggle hardware or ask your own question.

19
Why do light switch buttons have up/down direction when it's really a toggle function?
9
How to handle settings which can be both set mechanically and via a computer?
5
Implementing a "Delete Mode"
6
What should a toggle switch do when using a multi-select?
8
Triple-state toggle: 'turn on', turn off', 'auto turn on and off'
1
Proper way to handle radio buttons that deals with batch jobs
2
What delay should be present on a soft power switch?
1
What should be the color of ON state so that user doesn't switch it off?
2
"Intermediate" state of a two-level toggle/switch control