"Did you mean" search results

This UI allows the user to add names of people (with matching User IDs).

The problem is that, there has been many instances where users accidentally add people that already exist, resulting in duplicate entries.

To mitigate this problem, we're adding a "Did you mean?" section that is displayed as the user is typing in their query. 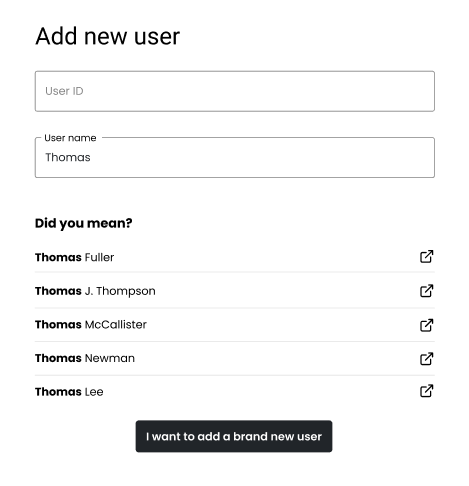 Separate the User Lookup Task from the Add Task

In other words: Remove the "Did You Mean?" section.

In the provided example, it's easy for a user to get distracted and wander off from the key task of adding a new user. Example: "I need to see if Thomas Jones is already in the system. Oh, there are two people called Thomas Jones... I wonder if one of them is the same one that I'm trying to add. Maybe I should look carefully at each suggestion to see if it's the same guy..."

Or: "Ugh, Thomas Jackson is still in our system? He quit two years ago! We should really scrub those old accounts. I'll get started on that now."

You should definitely make it easy to look up existing users... but separate that from the Add New User flow. One task at a time.

If a user already exists, simply show an error that says "User thomassmith already exists in the system." You can make thomassmith a link to his profile page for troubleshooting, or provide another area on the page to do a quick user lookup. But showing multiple suggestions creates an opportunity for the user to start clicking around, and wander away from adding someone new.

The user lookup area would be a great place to add suggestions when there are no exact matches for finding an existing account.

It's on your engineering team to make sure that duplicate accounts aren't created. Make unique user IDs a requirement.

Side note: Consider the security implications of allowing any user to look up everyone

It's possible that this is fine - it could be a closed system where everyone who is able to authenticate can see everyone in the system, and add new people.

But if unauthenticated users are able to look up any user, consider that bad actors can abuse this - finding people who they're stalking, as an example. In that case, you want to provide as little feedback as possible until they have a role that grants them access to more information.

I think it's a design problem.

You are putting an unnecessary graphic limit at the card bottom: the black button.

By changing the location of this button, the number of "new users" can be 5 or twenty without generating any UI problem. 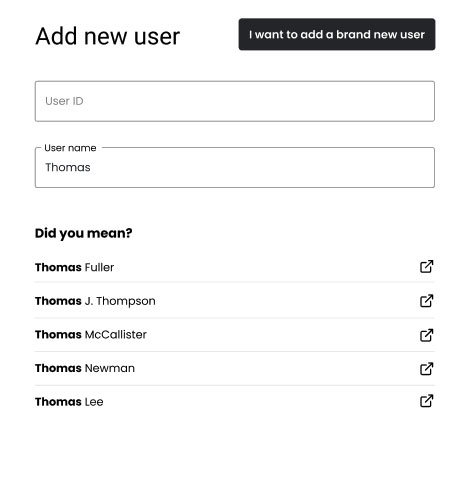 In this example the button is at the top not as a final solution but to show the design versatility without that stop at the bottom. The sense of this answer is to change the position of this button to allow the addition of new users without any graphic limit.

"Did you mean?" is out of context and demeaning for your purposes.

I would name it "Existing Matches" if you're interested in keeping the current interface. The other answer does a good job of suggesting the relocation so I'm not going to beat that dead horse.

Presumably the next step in your interface is to enter the person's full details, right? It would make more sense to provide a "Possible Matches" warning during this step since you get more information to base your matches on.

Not the answer you're looking for? Browse other questions tagged forms user-expectation search search-results data-entry or ask your own question.

8
Hotel Finder by name - should it take you directly to a hotel page if it matches the search, or to the search results page?
7
How to display misspelled words on search results?
1
Best order of heuristics for filtering gift suggestion search results
4
Guidelines to design a No result search page
1
Deciding on a user interaction
0
Delay showing updated search results when a user is signalling a potential match
0
What is the best approach to search when offline?
1
Best way to design a search functionality so that it brings back a set of results with a focus on the items that can be booked through the website
1
good ux design patterns to add/edit/remove entities in a mobile app?
1
Displaying sections in the UI in Support Search as additional results