UX Party Game Design - Should an action that is not available for all players disabled or simply hidden?

I am working on a party game for both PC (mouse+keyboard, which supports mouse over and clicks), but also for tablet (Android/iOS, which only supports clicks), but I am stuck on which UX pattern is be used throughout the game for the UI.

For the sake of the question, I am doing an example.

Imagine a well known party game, such as Werewolf or Mafia, etc, that is played using a digital device. There might be 5 people playing the game, each player is using their own device and has the game started on it. One of player is assigned the "game master", who controls the game.

Now, let's say all the players are in a "lobby" of some sort waiting for the actual game to start.

The only player that can "start" the game is the game master, so they obviously see a "start game" button;

But what should the rest of the players see?

I want to convey to the rest of the players that, the game can be started, but not by them, but by the game master.

1) Also see the action, but it is non-interactive disabled for them

But this may confuse the other players. They see the start button, they understand its disable, but don't know why it is disabled for them.

2) Also see the action, but it is interactive - Meaning, if clicked, a popup with information is displayed saying "You cannot start the game. Only the game master can start the game".

But this is weird, since it looks like it is disabled, but it is actually interact-able. 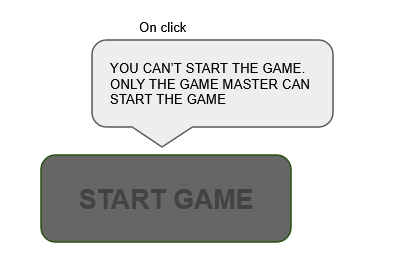 3) No action, but there is a help text instead for the rest of the players.

This is great, but in some situations, large amount of texts won't be possible, so does that mean it in those situations it defaults to 4) not showing anything?

4) The user simply doesn't see action or text at all, since they can't start the game.

But this gives no clue to the rest of the players, why the game is not starting, how who can start the game, etc.

I know this is a hard question to grasp, but my question is about action visibility.

Should non-available actions be displayed for players, so they know the action is there, but they can't do it for some reason. Or should the UI be minimalist and actions players cannot do, should simply not be displayed.

Your 3rd option is definitely the best. You want to make it clear that the game is awaiting an action from another player and they just need to wait (or shout across the room: "Hurry up will ya!").

If your concern is about having too much text, then just cut it down to something shorter, for example:

You could even consider some sort of "waiting" icon next to the text, like an hourglass or similar. This will help convey the requirement for the user to wait.

#3 is the only right answer. This way you will be keeping your user informed about what is going on (the "visibility of system status heuristic") without cluttering your layout with a useless button.

F. WaltrickF. Waltrick
1
Add a comment  |
0
Want to improve this post? Provide detailed answers to this question, including citations and an explanation of why your answer is correct. Answers without enough detail may be edited or deleted.

#3 Sounds the most intuitive. If there is no possible function, then why display it in the form of a button?

Not the answer you're looking for? Browse other questions tagged usability user-expectation call-to-action visibility or ask your own question.

4
How to create a call to action for small kids?
0
How does one know which call to action to optimise for?
5
Tests on more "human-ish" forms
1
Is it worth making an exception to a single-click master/detail pattern?
0
How to display this piece of information on a web app?
11
Should clicking on a playing video take the video to fullscreen?
13
Should an 'error message' be shown before or after user interaction?
1
Should a delete action be displayed regardless of state?
1
Should we show user information for deactivated accounts?
2
Adding and accepting score