In our web application, we have a search field for users to search for other users or other groups of users to add to their project.

Both users and user groups can be a long list. The search field is within a form, so the selection of items must be within that interface. There is no dedicated search results page. We are planning on separating the search dropdown into two sections, users and user groups. Users add items by clicking "add."

Question: Should we use scrollbars to convey to users that there are more results or trust that users know they need to continue typing to filter further the results?

Personally, I think you are edging towards making it overcomplicated. You are fortunate to have a simple use case, so make the feature simple too.

I would suggest you simply have one list which is a mix of groups and users. You can differentiate with a simple icon. You also have the benefit that in almost all cases, it will be obvious which ones are groups and which ones are users. Consider "Administrators" vs "John Smith". Grouping them with headers is just overkill for this scenario.

I would also say that the scroll bar is very important. For example, you may want to search for "John" but you can't remember the surname... and there are 100 Johns in the system. A scrollbar is critical in that instance so the user can scan the list for the one they want. I appreciate it's an unlikely scenario, but you lost nothing by having the scroll bar supported, and you can make it conditional anyhow.

With that said, here is a quick example: 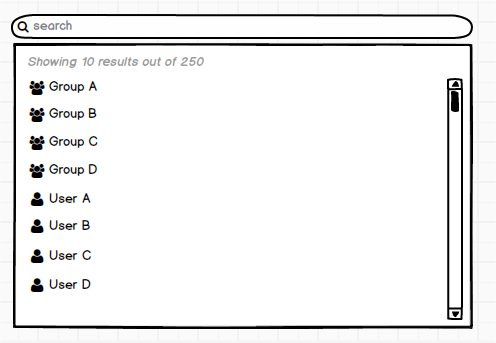 You will notice I didn't include the "add" button. I think it is fine to include it, but I don't think it is required either. So it's up to you if you want to include it or not, shouldn't matter much either way.

Not the answer you're looking for? Browse other questions tagged search search-results search-suggestion or ask your own question.

13
Extensive filtering on search results page
1
Best order of heuristics for filtering gift suggestion search results
7
Drop-down list with advanced search
1
"Select all" and search field in a table
1
Type search vs Guided search
7
Displaying and/or searching across thousands of contacts?
4
How to have both Search and Add options?
1
What is the Best Predictive Search Results Bolding Pattern?
5
"Did you mean" search results
1
Search filtering in B2B product