I have a site where at one step in the wizard the user has to make a choice between one option or another. Once they've made this choice the form fields and resulting information are specific to that response. However this is not a fixed choice so having made it they can switch between the two to see which one they prefer.

Instead of having both sets of response forms and information displaying at once it makes mor sense to only display that which relates to the answer they chose. (There is quite a lot of information belonging to each response) Which method here would work better?

I'm planning on putting the two sets of forms behind tabs so that the user can switch easily between them, but i'm concerned that if I initially present them with the tab panel it gives extra prominence to the open tab over the closed one. We want the user to have a free choice over which option to take.

I also need to have a brief description against what each option means.

I think there are two options I'm considering. First, to open with the tab panel at one of the states with information about this state vs the other (with option to swap if the tabs aren't noticed): 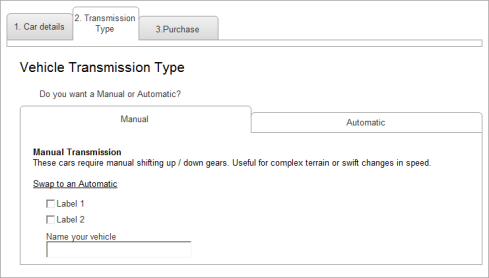 I've also got another idea where I present the two options as a pair of buttons with descriptions to choose from, which when chosen will then open the tab panel in the required state. However going with this means it's not so clear that you can change once you've made a decision so I've replicated the description text and link to the other tab within the panel. This is resulting in quite a long messy page and that's one of the things i'm trying to avoid in the first place (here the content below the red line isn't displayed until the question has been answered) : 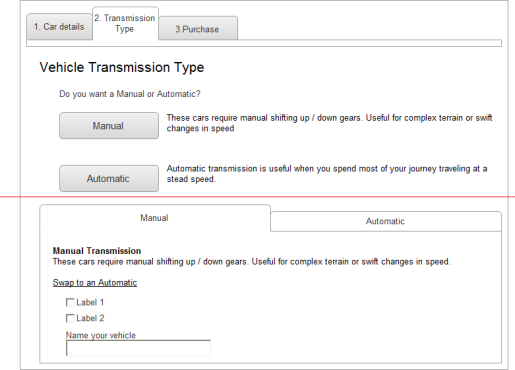 I'm sure issues like this have cropped up in other sites but I can't find any examples of how they've been handled. Which of these routes I have gone for is preferrable (if any) and why?

/EDIT - I should mention that I use car transmission purely as an example here, this isn't the actual purpose of my application but does give a good example of the particular issue.

this may be too much of a desktop approach, but I would do it like this:

Note that looks a lot simpler, because:

Not the answer you're looking for? Browse other questions tagged forms wizard question-answer or ask your own question.

1
Would it be a good or poor user experience if I guide users through a wizard and not let them see it again?
5
Why are two forms on one page bad?
1
Dialog box on top of wizard
3
Order of keyboard tab navigation within a form with help links
3
What's the best way to work with master/details when inside a tabbed control?
1
Complex form: Accordion + vertical navigation menu + back/next
1
How to display more detailed configuration?
3
Tabbed form - horizontally stacked sections
2
2 selection buttons 1 preferred but with different input types
26
Form layout with fields which are sometimes input and sometimes output