This isn't a problem I'm solving, it's more of a theoretical UX question.

Twice this week, I've checked my email on iOS and accidentally deleted important conversations (which I've had to hunt for and un-delete). The flow is like this:

What's annoying about this is that I check my email in an aggregated view (best feature of iOS, in my opinion) and if I need to retrieve an archived email, I have to go through each Archive/Trash can to hunt for it.

If this was your problem to solve at Apple, how might you solve it?

interaction-design workflow error-prevention
Share
Improve this question
asked May 27 at 15:51

I think there's already a solution for this: undo shaking your phone

Apple already has a solution for this problem in the Messages app.

When viewing the list of conversations, a leftward-swipe on one reveals the delete action (among others) which requires a press to actually delete the conversation. 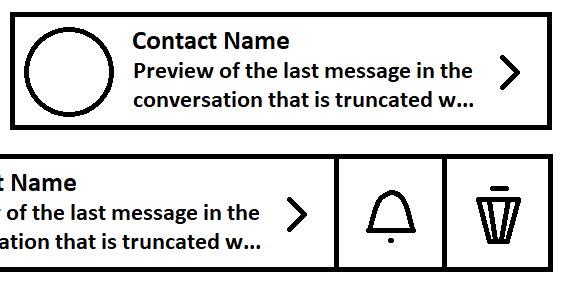 I assume emails don't follow this pattern because the extra interaction takes time and deleting an email is much more likely to be a bulk action than deleting a conversation in Messages. Additionally, there is no way to recover a deleted conversation (iCloud and the like excepted...) where emails can be recovered from the archive/trash folders inside the email client.

Personally, I don't understand why applications don't wait for a period of user inactivity to present new, fetched data. In my mind, it's similar to the problem of lazy-loading images/ads on a website where the user's reading is interrupted while the page re-flows.

If you do want to display new items as they are loaded, the pattern of allowing actions on multiple selections might be the way to go. The user either enables the selection mode and starts checking emails to delete or the act of swiping on an email adds it to the selection. Once the user is satisfied, a single press is used to delete all selected emails. This way even if new emails are loaded while the user is making the selection, they can be immediately deselected instead of requiring the user to navigate to find and un-delete them.

This is one of the 8 golden rules of UI , and falls into Rule 6, although it also has touch points iwth Rules 5 and 7

5 Offer simple error handling. As much as possible, design the system so the user cannot make a serious error. If an error is made, the system should be able to detect the error and offer simple, comprehensible mechanisms for handling the error.

6 Permit easy reversal of actions. This feature relieves anxiety, since the user knows that errors can be undone; it thus encourages exploration of unfamiliar options. The units of reversibility may be a single action, a data entry, or a complete group of actions.

7 Support internal locus of control. Experienced operators strongly desire the sense that they are in charge of the system and that the system responds to their actions. Design the system to make users the initiators of actions rather than the responders.

So a simple Undo button (with multiple Undo actions ) is the easiest, simplest, and least intrusive option.

If you want something more complex, this is how I would do it:

4 Design dialog to yield closure. Sequences of actions should be organized into groups with a beginning, middle, and end. The informative feedback at the completion of a group of actions gives the operators the satisfaction of accomplishment, a sense of relief, the signal to drop contingency plans and options from their minds, and an indication that the way is clear to prepare for the next group of actions.

Then again, as I said before, I would just use Undo (and maybe combine it with the first alternative approach "under the hood"). But of course, it's just my subjective view, guess Apple engineers ran a lot of usability tests and have their reasons to do what they do

Not the answer you're looking for? Browse other questions tagged interaction-design workflow error-prevention or ask your own question.

10
How should email threads be ordered?
5
How to avoid accidental email sending?
1
How to let user go back to the root view on iOS
4
Do we really need to ask for password on iOS “login with email” screen?
1
How to prevent user form entering password to next to password field?
5
How to tell users that s/he might be adding a duplicate record
0
How can I prevent people from pretending to be a business and registering account under their name?
1
How to Handle User Email Confirmation After User Becomes a Paying Customer And Doesn't Confirm Email
6
How to let the user update their email if they used a social login?