I am designing a page for apps. This page will show apps available for integration. 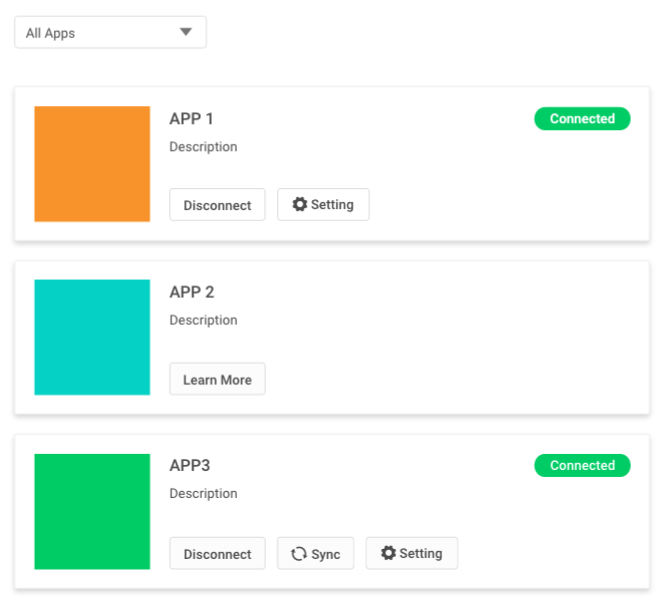 Thank you in advance, guys!

I just noticed you're also looking for some help, so I figured I'd take a Stab at it :)

As a general note: I think we have a relatively "low impact" issue on our hands here, meaning neither approach is likely to pose a major hurdle to the user. However, these type of details do add up, so your question is entirely valid!

For starters, you'd definitely be doing yourself a favor in not committing to having an icon for every button, since it costs you time to search for an icon that is at the very least somewhat relevant to the function. Especially once more features are added. I'm in a similar situation with my current project at the moment, and we have some downright laughable icons for some stuff...

Now to address the user side

Icons such as "settings cog", which enjoy almost universal recognition are super helpful and actively sought out by users. So I think it would be unfortunate to drop the icons altogether!

Personally I'd even prefer to use some "less than ideal" icons for some functions, than to forgo the benefit of these standard icons completely. Even more so if you have the chance to commission custom which are more representative of your functions. But that's a rare luxury.

Bottom line: I think you can mix the button types. If the actions were vertically aligned it would be a different story, since the start of the word would jump around

Some more things to consider

I totally agree with you that having an icon for "read more", "connect", "disconnect" is weird and not likely to be of great help to your users. Thinking out loud: For the purpose of argument you could consider to "officially" classify two icon groups: "Primary" without icon (connect, disconnect, read more...) and "secondary" with supportive icons.

If it makes sense you could group the buttons that have an icon together and vice versa, for additional consistency. However, if there's a clear priority and logical order to the buttons than this is of course more important.

I'm aware my answer isn't as clear-cut as you'd probably hoped, so I'm more than happy to keep the discussion going if you have any questions or counterarguments :)

Not the answer you're looking for? Browse other questions tagged buttons icons labels consistency cognitive-load or ask your own question.

3
Internal Consistency vs. Consistency across the Industry
2
Too many text-only buttons
1
Should I use two different icons?
4
Columns in a table - settings buttons position
3
Consistency or best ui control?
5
Follow company consistency or OS convention?
2
How to maintain visual consistency across all the client's mobile apps?
0
Material Design for web: Buttons with labels or icon buttons?
3
How to group multiple buttons on mobile