Yes and No questions - Are a "checkmark" and an "X" icon not neutral enough?

I'm concerned about your opinion - what do you think about the graphical description for yes and no questions? Do you believe that they are not neutral enough? 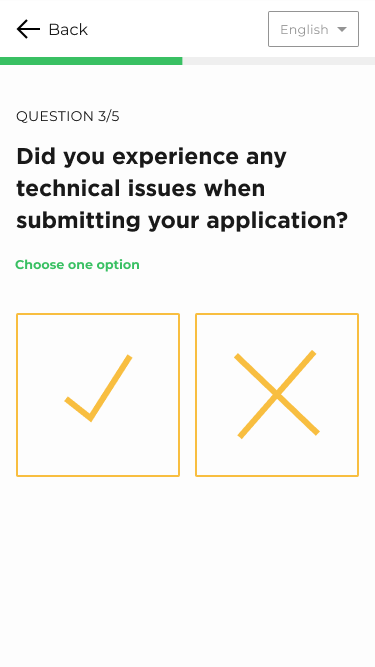 The problem with icons is that they can mean different things to different users. In this instance they could be confused with "pass" and "fail" as that is essentially what the question is asking. Which would result in the opposite of what you want them to mean.

At the very least, you should include some text with those buttons. That way you don't rely on the user having to guess what the icons are supposed to mean.

However, my suggestion would be to remove the icons completely. Just stick with what people are familiar with when they do a survey. Have a simple list of text options to choose from. Something like this:

You are not limited to a simple style, you can make them look like nice buttons with a more attractive radio button/checkbox graphic, but the overall aim is to have clear, descriptive text alongside a selectable button.

There is a good reason why most survey UI designs use this simple approach, and I can assure you it isn't because nobody was ever creative enough to make some nice looking icon buttons.

Thank you for your answers and valuable feedback. In the end, I moved on with radio buttons and regular text as suggested above. 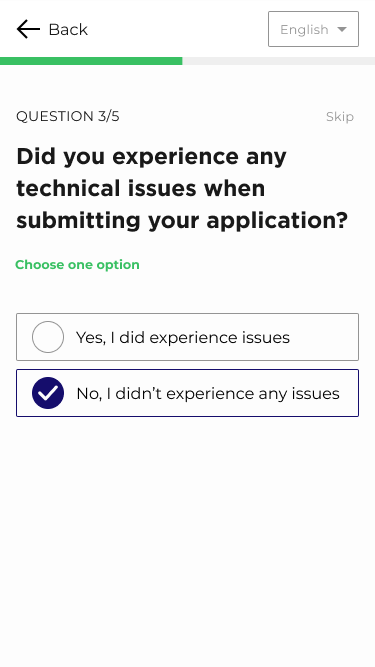 They are ambiguous, different cultures use them differently.

Perhaps use something unsrestood by all cultures, like smiling and frowning emojis instead. But even then include words for those few individuals who do not understand facial expressions.

In primary school, I had half of the teachers using the checkmark to mean that answer was wrong. (V as on 'Väärin' / Wrong in Finnish). And the other half using it to mark the right answers. I'm still confused.

Not the answer you're looking for? Browse other questions tagged surveys ux-writing or ask your own question.

3
Information density vs. number of pages for users with low computer literacy
1
Is an "in-page survey" a good way of retrieving useful users opinions?
1
Asking users to guess a distribution of answers, rather than a single answer
2
What is the best way to display results of a user satisfaction survey?
1
Survey tool to ask questions on individual pages - what are they called?
1
What's the difference between copywritting and microcopy?
0
Online survey method: Redesigning existing website for an agency
0
Open ended questions or not for screener surveys?
3
Multiple choice questions - are they always leading?