Like any interface we have buttons which triggers various behaviour when you click on them. Now we want to implement another type of button which does something as long as the button is pressed.

I've been trying to find any convention regarding how to differentiate these two types of buttons. In the real world the "press and hold" buttons are (as far as I know) usually round. Like in this example with a control box for a tailgate lift: 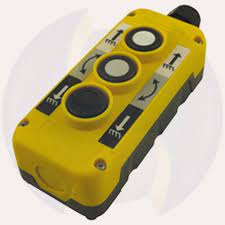 But then again, most buttons in the real world are round...

What we've done before is adding something on a label above the button saying "Press and hold to..." but now we want to have a specific button.

You're right to be concerned about communicating the need to hold. In playing and watching other people play video games, I've often seen users (players) conclude that some action doesn't do anything (or is broken or has some unmet requirement) because they did not press and hold a button, or in some other way did not “hold still” long enough to see the effect.

I'm not aware of any widespread convention for buttons that require press-and-hold. However, continuous actions very often come in pairs — “up” and “down”, “in” and “out”, etc. My first suggestion is make pairs of movement actions clearly pairs.

Second, if it does not conflict with safety or other functional requirements, make sure the effect of the button is responsive even to short taps. If the user taps the “up” button and then sees and hears the machine go up very briefly, then they will quickly realize that they should try holding the button. Focusing on responsive control will also help the user operate the machine more easily, pleasantly, and accurately.

If the effects are not obvious to the senses, or it's not appropriate to allow short actions, then add an explicit cue: When the user taps the button quickly, pop up a “tooltip” over the button with a message like “Press and hold to move.” Make sure that this popup is visible given users' typical hand placement, and does not obstruct normal use of the interface (e.g. does not cover other buttons), in case it falsely triggers.

Take for example the home button for older iPhones with a fingerprint scanner. When the phone is locked you just hold your finger on it and it scans and unlocks the phone.

When trying to get out of an app you "click" the button. So the same button serves two purposes depending on the use case.

Here is an example of a car lift with similar functionality.

The Down and Up buttons can be pressed and the action happens while you hold the finger pressed. When you remove the finger it stops.

The Unlock button when pressed will have a back light on it to indicate that it is activated. 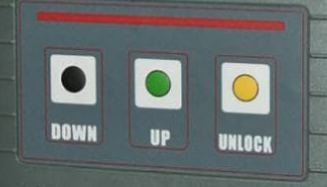 My experience with real-life press and hold buttons ( like the tailgate lift controls pictured) is that the buttons 'press in' ( ie they have reward travel), you have to keep them pressed down to keep the action going.

So with the digital versions it needs some kid of 3d effect to show that they are depressed ( and if they aren't 'held down' they undepress).

Not the answer you're looking for? Browse other questions tagged buttons industrial-design or ask your own question.

11
How long should a press-and-hold-button action be?
11
Best Place for a Back Button on a 7" Tablet Menu
2
iOS navigation bar buttons design considerations
0
What would be the best actions to attach to an Android phone's buttons when I don't really need them?
7
Why do many/most (Android) phones have the power button opposite the volume buttons?
2
Colors and labels on buttons that reflect state
115
Toilet flush buttons
4
How to differentiate between button and label
0
Button Behavior and when to trigger on release