Ask for reviews in mobile app

I am working on asking for reviews via our mobile app that will be supporting our rating in the iOS and Play stores. We're thinking about displaying the usual 5-star rating which will allow users to tap a star icon from 1 to 5 and then a thank you message will be displayed. Stakeholders say that's too risky as there could be users tapping wrong ratings with terrible consequences for our app review system. Is there any best practice when it comes to tapping these elements to avoid frustration or undesired outcomes? 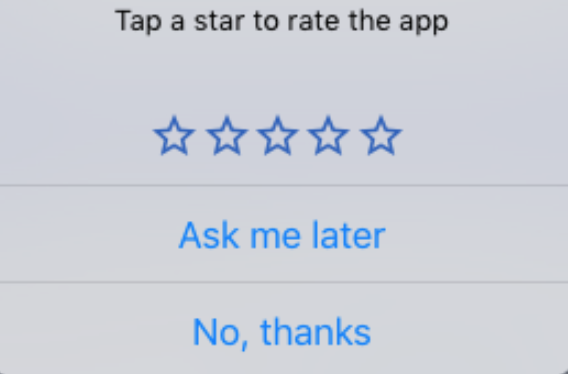 Seeing as how Google just recently published a new API just for in-app reviews that looks almost exactly like your version, I would assume that it is an acceptable method to use.

And after just looking it up, I see that Apple has had such a feature for over a year now as well: 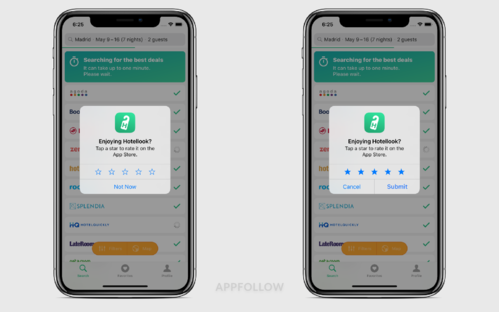 So if both platforms seem to be fond of this type of review method, I would simply assume that it cannot be that bad of a thing to do.
Users still have to confirm their decision, I don't see how or why users would just randomly tap a star and then confirm that rating without further logic.

Other than that I do not have any specific best practices, though.

Not the answer you're looking for? Browse other questions tagged mobile app tap or ask your own question.

22
Asking feedback/rating for a mobile app?
6
Uppercase for a mobile app
3
Ask for geolocation at startup in a mobile app
5
Strategy to ask app-users for review
0
Coming Soon Mobile App - How do I ask for users email?
5
Displaying information hierarchy and readability on mobile app
1
What is best practice for prompting for app reviews?
3
Best way to show that there are many viewable photos for mobile app?
2
When to ask user for registration