This mobile tablet app displays full screen photos with a reply button. When the user (a senior over 65 years of age) clicks reply, a modal reply screen slides up from the bottom as shown below.

Question #1. Should the photo be represented on this reply screen and if so how large? Current design has a 25% scaled version of the photo which takes up a lot of screen real estate and adds clutter, but it's there because we're targeting seniors. 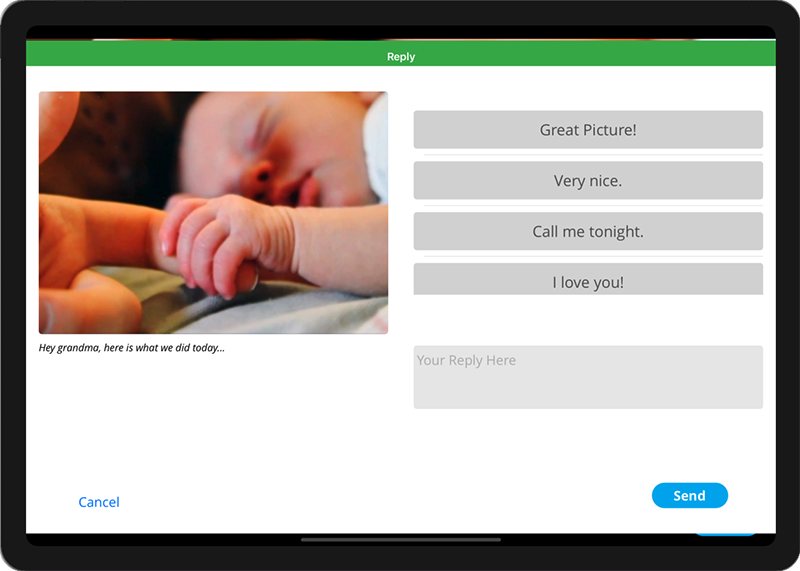 The image is a bit large, but this may be a design guideline. I think there are more important structuring and design problems.

Problem: There's no clear difference between the received message and the message to be sent. In fact the title Reply occupies the whole screen width and leads to confusion.

Solution: Make a clear difference between the container field of the received message and the sending message.

Solution: make them look more like buttons or use a picker element instead

Problem: The background color of the canned responses is practically the same as that of the text input box, this makes them look the same type of component.

Problem: All interaction elements are grouped on the right of the screen, except Cancel.

Solution: Group all the interaction elements in the same activity area. If it's necessary to show that Cancel is apart from the rest of the elements, give greater visual presence to both: Cancel and Send.

(This is personal) The separation lines between the selectable elements have no function, generate noise and visually unify the group preventing the immediate interpretation of selectable units.

I think the example screen is a starting point, but not a final design. I would study the following points in general terms taking into account the type of end user:

Not the answer you're looking for? Browse other questions tagged accessibility ipad tablet or ask your own question.

1
Web App on PC & Tablet - Tablet cue for scrollable panel?
1
Native tablet apps or web app
8
Checklist App (Process Documentation) Interface For Android Mobile Tablet & Phone
6
Android tablet app pagination
3
Designing for a tablet: where to put 'actions'?
1
How to compare two items side by side within limited space on iPad?
4
What is the best tablet case for use by patients in a medical environment?
1
Popover Menu with Only One Item, but Potentially Two