How to stop user loading more records on grid

In one legacy UI application on which I am working currently, has a Main List which is used to display all records stored in elastic in paginated way. Elastic may have more than 1 million records.

The problem arises when I added a functionality of loading next page of records when scroll touches bottom (no direct pagination widget).

In the introduced functionality of scroll load, user can scroll infinitely. for each "scroll at the bottom" event, data loads from 0 to pageNo*pageSize records. I set page size as small as 50 records. So, for example,

I want to acknowledge user after a certain page number like 20 pages(1000 records loaded on browser) that Don't go further otherwise application will become slow, use search with keywords instead.

Actually, I am doing so by putting simple auto hide alert which will start appearing from 20 pages onward and will display in interval of 5 pages like 20, 25,30 etc.

Is there any better way to acknowledge user that he is exploiting functionality because we are allowing him to do so?

I know this type of data loading sounds crazy but this is what we have to do. I need help on letting user know that application will be slow after a certain period of time.

Following is the sketch of Web application portal I am talking about. 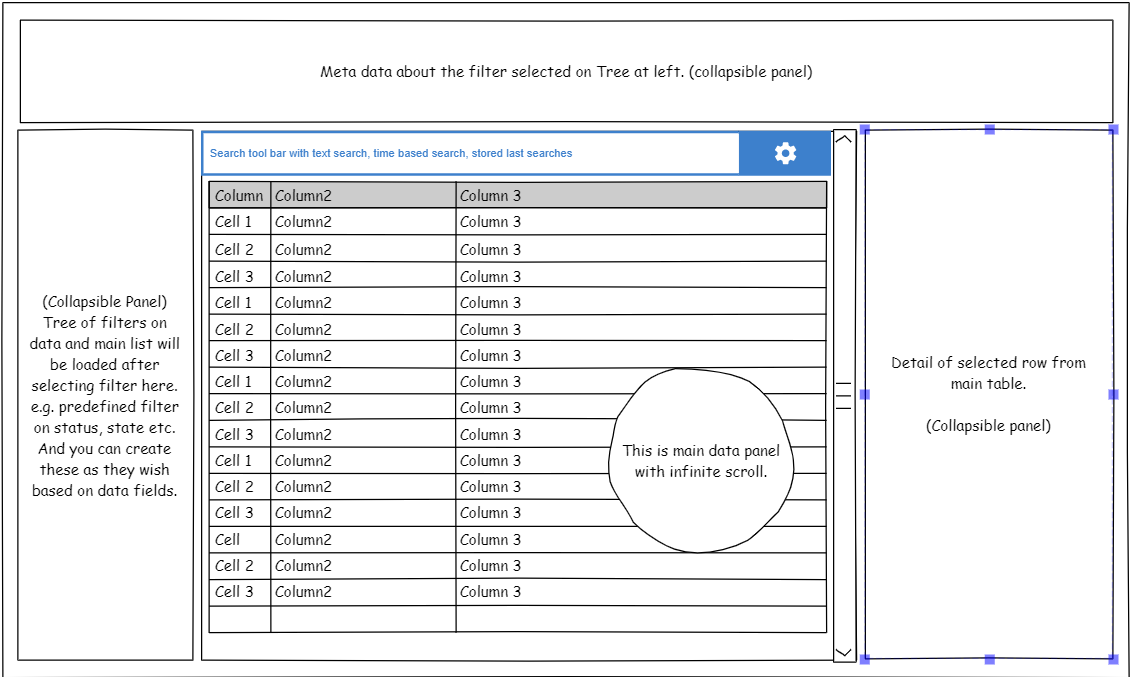 After a decided limit, stop automatically fetching more records and switch to a pagination style navigation.

So perhaps you decide that you'll stop the infinite scroll at 500 items, then start paginating after that, with 100 items per page. The bottom of your (non-)infinite scroll section will show a View more items → button, and land the user on page 6, showing items 501-600. From here on, the user sees only the paginated navigation, so their device doesn't get overwhelmed with endless DOM elements.

Also, take this opportunity to ensure your search tools are easily discoverable and not hidden away where they can't be found.

Anecdotally, my bank does something similar to what you hinted at: after clicking to load more transactions for the third time, it suggests that I use the search tools instead, but still allows me to dismiss the tip and continue clicking for more. However, I haven't tried to see how long it'll let me continue with that.

In your case, I would try to include both options, pagination, and infinity scroll. The following is an example. 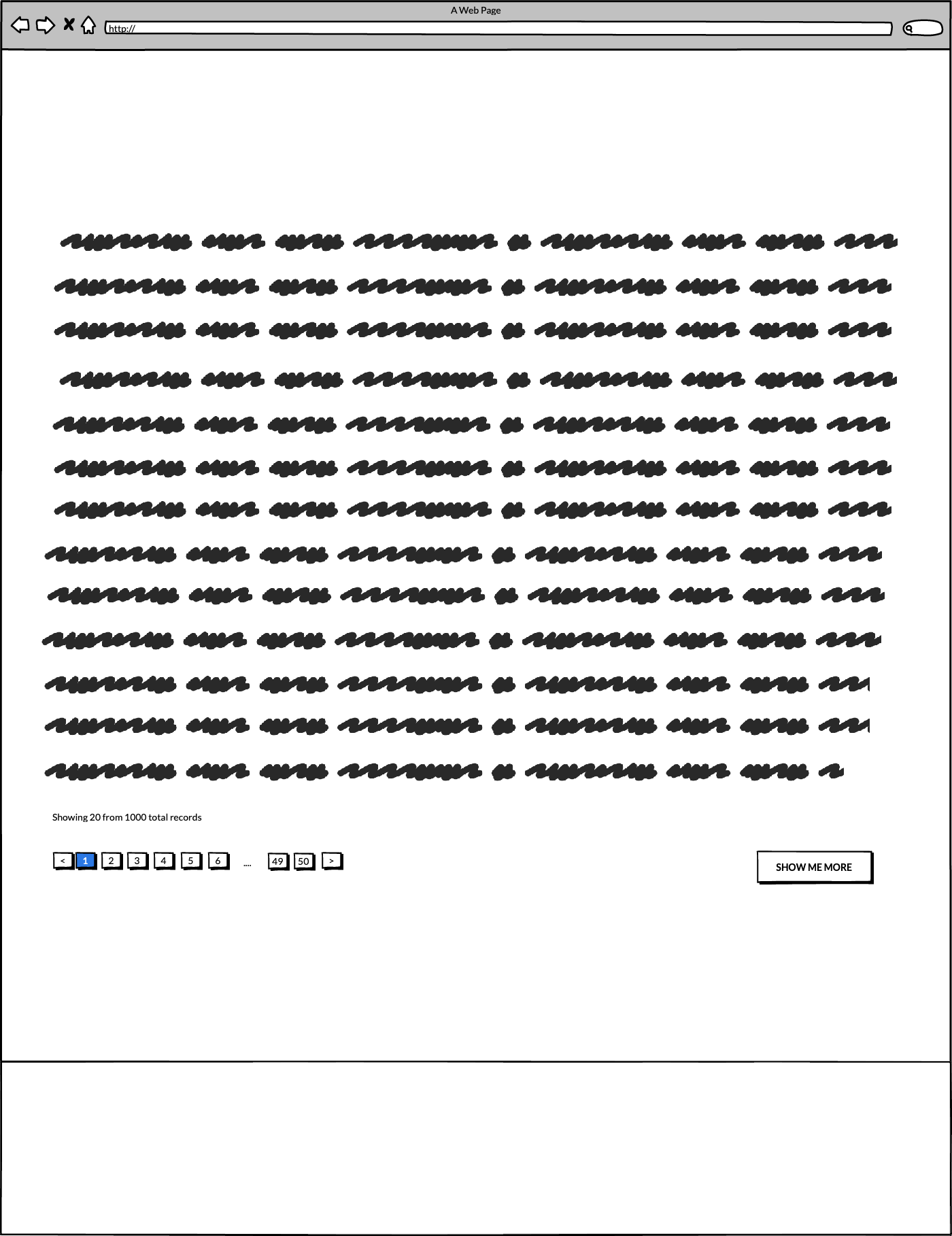 Is the message the problem?

I’m not clear what your problem is, except that you don’t seem to like your users or how they’re using your app (you call them “lazy” and say they’re “exploiting” (abusing?) a feature, but you “allow” them to do so).

If the answers are “no” and “no,” then maybe you don’t need a message at all. Just accept that users will use your app this way, probably for good reasons you don’t understand with the information you have right now.

If the answers are “yes” on 1 and “no” on 2, then a message is useless. It tells them something they already know. Instead, maybe you need to focus on your search tools UI. Perhaps the real problem with the app is that entering (additional) search criteria is so complicated, or time consuming, or has such unpredictable effects that users feel better off if they just keep scrolling.

More likely, adding a keyword means the users have to start all over again, and look through many of the same 1000 records they already rejected. They have a huge sunk cost re-doing the search. Meanwhile, the record they’re looking for could be just this one more page away, so let’s keep scrolling!

But I’ll assume the answers are “yes” and “yes.”

That being the case, I would go with a modeless message that appears right beside the 1001st record:

Main List response slows with so many records. Add more keywords to speed it up.

Exact terms need to be consistent with the labels and captions in you app. Maybe give the message a turtle or snail icon to catch the users’ attention and link the message to the problem they’re experiencing. Put the message by the 1001st record because that’s where users will be looking –they look at the next record on the list when they’re scrolling and scanning for something. It also helps associate the message with the problem –so many records.

Position the message so it doesn’t overlap anything. Maybe move things out of the way if you have to. Let the message scroll with the 1001st record so it naturally goes out of view without the user explicitly dismissing it, but the user can find it again in case they didn’t read it carefully (they probably didn’t). I don’t think you need to show it again 5 pages later. That just gets annoying.

All that said, I suspect you app has bigger usability problems than how exactly to show a message. Your users are scrolling through over 1000 records. That sounds like a lot of work that shouldn’t be necessary. What can you do to improve the design to make that very rarely needed?

It’s possible that the users’ task simply requires that they look at 1000+ records sometimes. Maybe there just isn’t a way to narrow down the number of records in a smaller number (e.g., their job or situational incentives require that they do an exhaustive search, not a merely sufficing search). If that’s the case, then you need to accept that they will go beyond 1000 records and find a solution to the performance problem. What exactly is causing it, and what can you do about it? Is it just due to the raw number of records in the window?

Paging will solve that, but the users don’t like paging, and I happen to think they have a point on that. The thing is, infinite scrolling isn’t much better, really. You need to invent a new way to handle this many records. What if adding records to the bottom also removes the same number of records from the top? If the users are scanning or processing the records linearly from top to bottom, then they’re typically finished with the records above. So remove them if performance is slowing.

What if instead of a scroll bar, there were something more like a “super-thumbwheel” that the user can click and/or swipe so the user can selectively show one record at a time or a page-full at a time, or more.

What if you had a graphic display (maybe in the thumbwheel or beside it) that gives a representation of the entire list without scrolling? Can you show where the user is among all the records in the results? Could the graphic display give clues are where in the results the user should look first and allow them to jump there? Can they first work on the records at a higher level of abstraction, and then, with a click, drill down to small list of records they are specifically interested in?

As always the solution to usability problems often comes down to what the user is actually trying to do.

Not the answer you're looking for? Browse other questions tagged data-tables pagination infinite-scroll or ask your own question.

57
Is scrolling better than clicking to reveal more content?
16
Pagination - a thing of the past?

5
Linking into an infinite scrollable stream
2
Displaying million records in Master Detail Grid (Million in both master detail)
2
Should I adopt infinite scrolling or classical pagination?
1
How to show the user can hover for more information
7
With infinite scrolling/pagination, how should I handle the user loading page 2, but there being new content on page 1?
3
How to tell user there are no more results - infinite scroll
20
How should “Select All” work in a “LOAD MORE” table?
2
What is the purpose of slideshow web layouts and how can they be used effectively?