How to handle out-of-range data in a realtime plot?

I am working on real-time data acquisition and visualization software for a scientific measurement device. The software gathers data from the device, and plots the data in real time. Data is generally gathered for a few minutes, and then stops. The user then saves the data to a spreadsheet file for further processing.

Most of the time when the data is out-of-range it's for a short period of time such as a few seconds or less. In some cases it will just be a transient spike lasting only a few data points. This is generally not a problem, but indicates that the user should probably change some settings before they run the acquisition again.

If the data is out of range for an extended period of time, this is an indication that something is probably wrong. The longer the data is out of range for, the more likely it's due to a problem with the user's actual experiment or the device settings set by the user. That doesn't mean the user must abort it, but it does mean that they need to be clearly informed that there is a probable issue.

To complicate things further, there are 16 independent measurements being plotted at the same time on the same plot. Some may be out of range while others are not.

With respect to the situations described above, what's a good way to indicate to the user that the data for a given channel is out of range in the real-time plot?

My Ideas and Attempts

One prototype I've written shows the text "Out of range" next to a channel in the legend on the plot while data being received is out-of-range. This only works if the user is watching the legend at the exact moment that out-of-range data is received. There's no lasting indication to the user that data was out of range if they weren't there to see it, until they view the saved data file at the end. As a modification on this, I may have the "Out of range" text slowly fade out if there is no more out of range data, to make it easier to see transients.

Another idea is to show a running tally of the number (or proportion) of out of range data points for each channel.

What about simply graying out the line where the data doesn't exist / is unreliable? 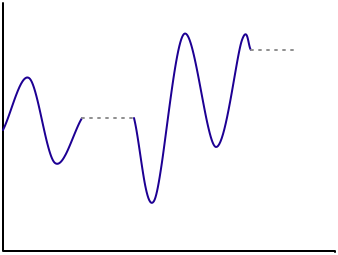 That way you can pick back up when you're in-range again, but there's an indication that there was a problem.

EDIT: Assuming your "out of ranges" are always trackable right up to the top/bottom of the range, the end-result would look more like this: 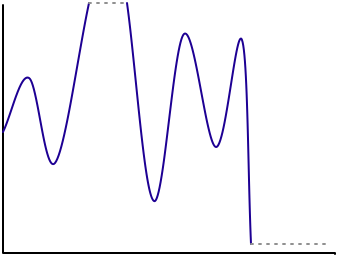 EDIT 2:For small out-of-range/unreliable data sectors (e.g. single data points) or out-of-range against the X axis, you could make it even more obvious with an icon: 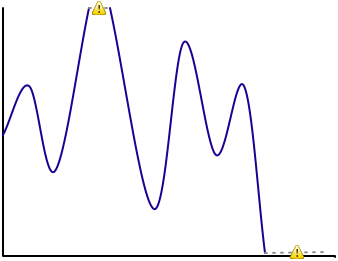 Obviously, the ability to do this depends on your display technology, as well.

Not the answer you're looking for? Browse other questions tagged info-visualisation data error-message graphics or ask your own question.

4
How should refer to data validation that happens mid-process?
2
visualising session data
1
How to show the relationship between two sets of data over time and geography?
2
Designing legends to handle overlapping/sequential values
3
What's the best way to label weekly periods?
1
User needs to paste clipboard data into website with CTRL+V, but the data they paste will not be shown to them. How can I make this intuitive?
0
Visualizing large tabular data
2
How to design a chart that has an x-axis with a fixed range that is longer than the selected range?
0
How to handle delivery time slots that expire before purchase is complete?
1
data visualization - how to visualize the lack of data for certain amount of time