Ask Question
Asked 10 years, 9 months ago
Modified 9 years, 8 months ago
Viewed 2k times
7
As it currently stands, this question is not a good fit for our Q&A format. We expect answers to be supported by facts, references, or expertise, but this question will likely solicit debate, arguments, polling, or extended discussion. If you feel that this question can be improved and possibly reopened, visit the help center for guidance.
Closed 10 years ago.

A skeuomorph user interface draws upon real world objects in its visual design in order to increase familiarity and the association between the product and its real world counterpart. Apple has been pushing this approach with apps like iCal: 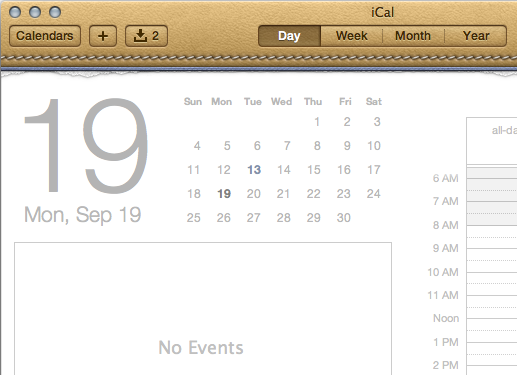 I'm looking to do some work in this area and I'm wondering what some good examples are of skeuomorph interfaces that you've seen. Please don't just list more Apple stuff ;) Any operating system works, including web-based UIs. Almost all GUI design was originally based on real-world design. Buttons? That you push 'in'? Checkboxes, which you click on and a pencil magically fills in the checkmark or X? 'Radio' buttons, though no one has a string-tune radio any more?

So...could you narrow it down?

Not sure about 'famous' but some familiar ones off the top of my head:

I actually think one of the best examples of this isn't a graphical interface at all!

They're a complete departure from traditional UIs because they both treat the device as a reactive, almost-conscious entity, rather than an inert machine. Living things are traditionally the only ones with which you interact with by voice (humans, dogs, etc)†.

† Yes, some people talk to plants.

Not the answer you're looking for? Browse other questions tagged psychology skeuomorphism or ask your own question.

264
Save icon, is the floppy disk icon dead?
68
Examples of placebos in UI design?

7
What kinds of personality archetypes are taken into account when designing an application?
61
What research is there suggesting modal dialogs are disruptive?
17
What evidence is there that dark patterns are bad for business?
5
What are the advantages of existing real world patterns in Information Architecture
17
What are the pros and cons of skeuomorphic design in payment transactions?
390
What explains the current shift from glossy UIs to matte UIs?
2
What are users attitudes towards help buttons
0
What are alternate UI/UX for Knobs?