Material Design guideline says this and it's really confusing me:

Does this mean if I put the cursor during focus state makes overlay lighter? 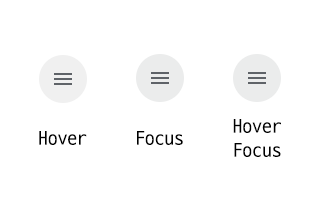 But behaviors of some other page which uses material design is quite different. In some pages hover and focus overlay is completely separated.

How should a button be like on hover/focus/hover and focus states?

Does this mean if I put the cursor during focus state makes overlay lighter?

In the example you listed, yes. While the cursor is on the element that is in focus, it would go into the hover state (lighter). When the cursor is removed, it would return to the focus state.

This makes sense in that some users employ both keyboard and mouse navigation together. The element that is in focus via keyboard controls should still give the user some indication that the mouse pointer is also on it – hence the temporary highlight/hover state.

Not the answer you're looking for? Browse other questions tagged material-design states or ask your own question.