I have a debate with my team about the size of text links on mobile. On one side are standards of accessibility and minimum tap sizes for fingers. On the other is Apple.com sign-in page where we have rather small targets for forgot the password or apple id.

So there argument is that if Apple makes these implementations in their text links, so why can't we do the same way, in some other scenarios. 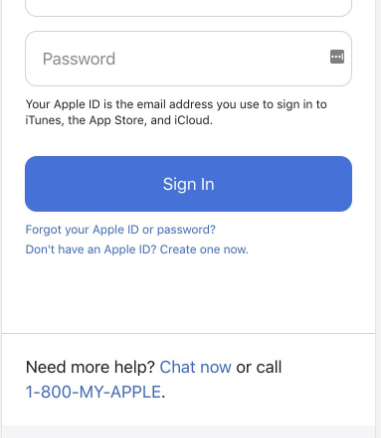 Well, I do know that it all depends on the context of the links. But I can't understand the reasoning behind Apple.com's sign-in use case. They do have the space to make them accessible to tap without misleadings.

Another mystery for me is the footer text links use case. 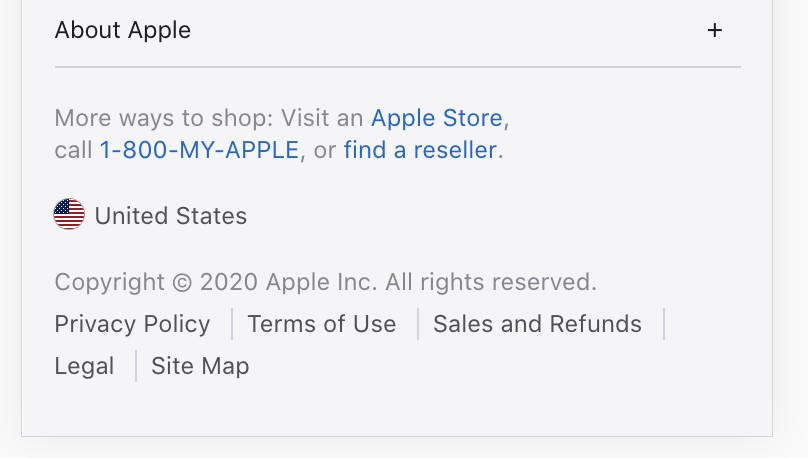 Why there are made so small for the finger to tap without misleading to a not intended destination. What are the exceptions when you should opt for this kind of inaccessibility?

Well this is a weighted question! My answer will be equally weighted! hehe.

Who cares what Apple is doing, they were the ones who introduced light grey text on a slight lighter background (that "trend" still hasn't gone away yet in some companies!), they do not get accessibility right all of the time! (but they do better than most and always try to improve, use that as the part of Apple to emulate!)

If you want your App / Website to be used by as many people as possible then work to the highest standards you can. Make every tap target as large as possible, minimum 44 CSS pixels wide and high.

If your team want to argue then get them to let someone with Parkinson's disease or Cerebral Palsy use your product and they will see the value of those extra 10 pixels here and there. Better yet get them to use your App while driving on a Country Road (as a passenger :-P), it isn't just disabled people that large tap targets help!

Lets try and look at this objectively.

According to WCAG 2.5.5 - tap target size, no they are not in the examples given.

This isn't to say that you should follow their example blindly. Your statement "if Apple makes these implementations in their text links" is analogous to "that guy over there stole a cookie so I can" - it is still wrong, do not assume Apple gets everything right (even though they do better than most).

Set a higher bar for yourselves than just conformance, aim for wowing your customers and providing the best experience you can for the most people.

I would argue that the question you should instead be asking is "what can we do that others do not to make sure our app / website is as easy to use as possible?". If adding 20px between text links makes it 20% less likely to click the wrong link your conversions will increase, that has to be worth the 20px!

You also stated "so why can't we do the same way, in some other scenarios.".

Mainly because other scenarios are not the same. A button is different to link text as part of a paragraph. It is like comparing Apples to Oranges in that respect (pun intended).

Now I would actually argue that this part of the guidance / rules is a cop out. With careful sentence structuring you can easily leave space between links. You can also make the touch target much taller by adding spacing between each lines and top and bottom padding your links. Just a thought, not a necessity to be "compliant".

What is the guidance

I already linked to the WCAG guidance on point 2.5.5 but I thought I would also include a link to Apple's own tap target size guidance (see General Layout Considerations) for completeness.

But in short, all buttons, standalone hyperlinks etc. should be at least 44 CSS pixels tall and wide minimum.

To put that in context on any device that should be approximately 0.9mm by 0.9mm.

For links within paragraphs there is no minimum required size.

Additionally if you have two different items on a page that perform the same action then only one of them must comply with minimum sizing, the other can be 1px by 1px if you really want. This tends to be the rule that surprises people the most.

Where should you actually aim

As I said previously, aim to wow customers! Make your targets larger than the minimums, make your line height a bit taller and add padding to your text only links etc.

What are the exceptions when you should opt for this kind of inaccessibility?

Zero! You should never "opt" for inaccessibility. I obviously stated what the guidance and rules say but if you have a design / dev team worth their salt then why compromise and work to minimums!

This question is analogous to "We are building a new Headquarters, let's put this step here as it is easier and we don't care about wheelchair users" - if you make a conscious decision to do something that excludes people then be prepared for some lawsuits (and I would hope some serious internal conflict!).

Now "opting for inaccessibility" vs "disproportionate cost" is a different thing entirely.

If it was going to cost your company £1,000,000 to add 10 pixels between every link then I would call that disproportionate.

Instead make the decision today that anything built going forward will exceed expectations, just do what you can with old stuff as nobody is perfect and budgets and time constraints do need to be considered. (using my building example, if it was an old building rather than a new build and was going to cost you far too much money to install a concrete ramp for wheelchair users to replace a step, then it is acceptable to have a portable ramp. Not a prefect solution but perfectly reasonable!)

So how do you exceed expectations? Why not make it a requirement that every single tap target is at least 50 CSS pixels by 50 CSS pixels! Go above and beyond!

I hear arguments all the time for "let's make this smaller as it doesn't fit the design" or "that button is too big to fit the context of the page".

Every single one of those arguments is from someone who doesn't have the skill to adjust their layout according to restrictions. No design has ever been ruined by accessibility.

Far from reducing creativity having to comply with these standards improves creativity and innovation.

Another example is why not write sentences so that links do not appear right next to each other. A slight rewrite of a sentence could reduce erroneous clicks and improve customer satisfaction.

As you can tell, I am of the firm belief that there are no excuses for deliberate decisions that make products less accessible. Ignorance to the problem is one thing, deliberately ignoring it once you are aware of it is discrimination and detrimental to your business. It also makes zero business sense...why would you make a decision that could alienate the 1 billion disabled people in the world?

/End rant (I lost my aim of being objective in this last section :-P I hope some of that was useful! hehe.)

Not the answer you're looking for? Browse other questions tagged mobile accessibility hyperlinks apple footers or ask your own question.