Is it bad practice to put hover interactions in a table? 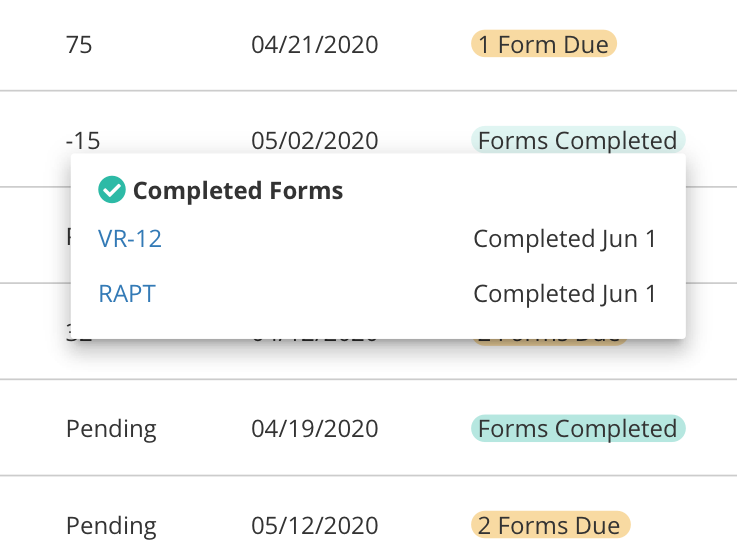 I'm designing a CRM table view for a medical web app, and a core need of our users (mostly surgeons and nurses) is to quickly ascertain the compliance of their patients by viewing

To address these needs I'm considering an interaction (img attached) on the page listing all the patients, wherein a pill component indicates for each patient whether or not they have forms due; and if the user hovers over the pill, it triggers a view of the forms in question.

My Question: Is it bad practice putting this type of hover interaction in a table, where users will be mousing around a lot and potentially triggering these hovers accidentally?

A note: Fwiw, patients will only have about 2-4 forms due at any given time, so the hover card will never be super tall

A click interaction might be better if the user would want to move their mouse outside of the pop-up zone, such as to scroll or check other information on the page. That would also cut down on accidental interactions. You'd need a way to dismiss the pop-up, but a simple "X" icon could accomplish that.

You should also keep in mind that anything revolving around "hover interaction" is only ever truly available to mouse users, not pure keyboard interaction (probably unlikely for your case), no stylus* or touch interaction. The latter is probably going to be more likely, as tablets tend to be especially popular among surgeons.

So while hover-interactions can be beneficial to speed things up, it should only be the second path to get somewhere, and you should primarily provide another "click-based" way.

On a more proactive note: if the number of displayed items is not that big, maybe by clicking (or tapping!) the "forms" entry, you could just expand the whole row to show the items in question in a second row underneath? Add the common 'X' to close it again, as Stacy suggested, and you should be golden.

*) Sure, theoretically hover is available for most stylus', too, as most are detected before hitting the surface. But that kind of "stylus hovering" is incredibly unstable compared to "mouse hover", so it's only useful for the user to aim their tap, and IMHO should not be used by any applications ever.

Not the answer you're looking for? Browse other questions tagged usability tables hover crm or ask your own question.

6
Hover over icon
6
Mouseover to reveal more data in a table
3
Best practice for a desktop version dropdown hover menu to work on mobile?
2
Hover states on tables with striping
5
Lowering opacity on hover. Isn't it totally wrong?
7
Does the hover functionality on Netflix's website break UI best practice?
2
Expand truncated table cell content on hover
0
Is it a bad practice to display both editable and non-editable fields together in a CRM-style interface?
3
Large Hover Menu/Navigation Menu - Categorically Bad UX?